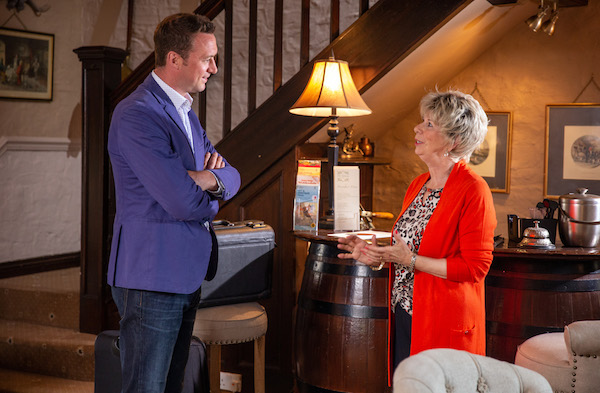 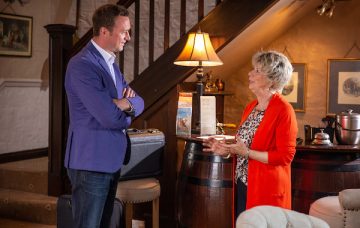 Emmerdale SPOILERS: Diane returns to the village with big news for Liam

Diane has some big news for Liam in next week’s Emmerdale as returns home to the village from her trip to Portugal.

It soon becomes clear that she has some big news for her daughter Bernice’s fiancé Liam.

But what does she have to tell him?

A couple of weeks ago, viewers saw Bernice receive news that her ex-husband Charlie, father of her daughter Dee Dee, had been severely injured in a car crash.

After a few harsh words from Dee Dee, Bernice realised she couldn’t allow her daughter to return to Australia to care for her sick dad alone.

Bernice made the decision to call off her wedding to Liam and went to Australia with Dee Dee in order to look after Charlie.

Although Bernice told Liam she would be back before Christmas, he was devastated to learn she would be away for longer.

Since Bernice’s departure, Leyla has had her eye on Liam.

The two starred in the village panto together and ended up sharing a kiss on stage.

However, things got complicated on Christmas Day when Liam’s ex-wife Maya Stepney, the paedophile schoolteacher who groomed Leyla’s son Jacob, left her baby on Jacob’s doorstep.

Whilst grooming Jacob, Maya was in a relationship with Jacob’s dad David, leaving them questioning who the baby’s father is.

David and Leyla asked Liam to check over the baby and Liam was able to get a DNA test fast-tracked.

Last night the identity was revealed…