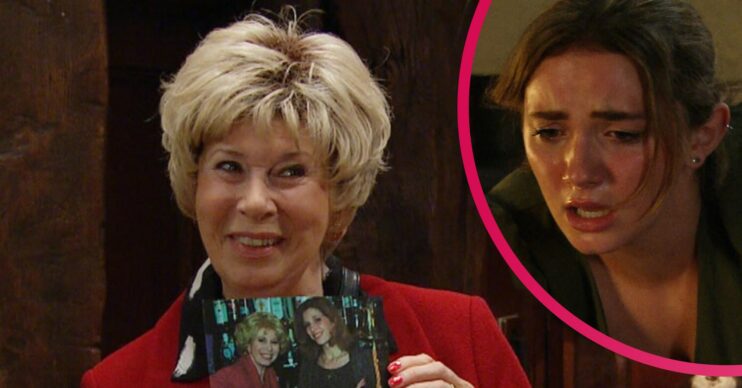 Emmerdale SPOILERS: Diane leaves Emmerdale – but is she leaving alone?

Bernice and Gabby are supposed to go with her

Next week’s Emmerdale spoilers tease Diane’s exit from Emmerdale as the Blackstock women try to keep their departure hush hush.

The plan is for Diane to emigrate to Portugal with pregnant granddaughter Gabby and daughter Bernice in tow.

But nobody knows that Diane is deliberately spiriting her granddaughter and unborn great-grandchild out of the village behind Kim’s back.

Will the trio make it out before Kim susses it out?

Although her friends in Emmerdale are shocked, Diane is sure that she’s doing the right thing.

She wants the chance to have another adventure in life after feeling unloved and stifled in Emmerdale.

It’s been a tough decision for Pollard to accept because Diane’s departure leaves him in sole charge of the B&B.

But even the grouchy Pollard softens as he and Diane make their last business move together when she signs over her share to him.

It’s clear that Pollard – who was happily married to Diane’s sister Val – will miss her more than he’s letting on, and she him.

And he’s not the only one who is going to struggle without her.

Although she’s said she doesn’t want a fuss, Chas isn’t letting Diane go without a celebration.

She digs out a box of Woolpack memories to share with Diane and Bernice, and the trio has a lovely time reminiscing.

Diane has said from the start that she doesn’t want a fuss, but Chas manages to cajole her into a small leaving party.

Read more: Emmerdale: Has Will left the soap for good?

The drinks are soon flowing, and Diane is having a lovely time as she enjoys a Woolpack send-off with her nearest and dearest.

But while she and Bernice are partying, Gabby has gone into labour alone at Home Farm.

As they head over to collect her en route to the airport, it looks like their journey is about to be delayed.

Will Diane make it to Portugal, or does Baby Thomas-Tate have other plans for her?