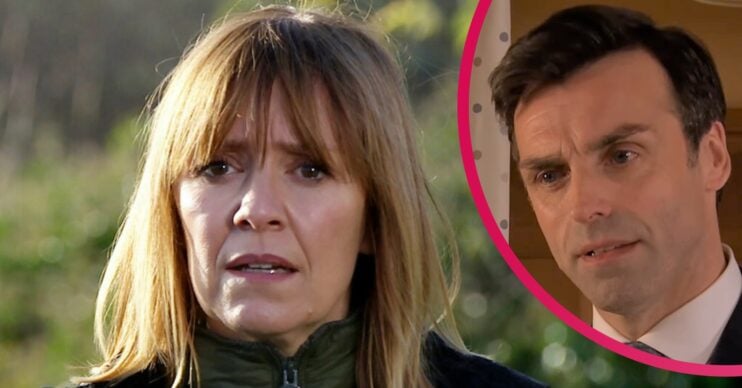 Emmerdale spoilers for next week reveal a huge shock for Rhona Goskirk when her ex-husband Pierce Harris gets in touch from jail.

He writes her a letter and drops a huge bombshell on her: he’s dying.

Will Rhona agree to help him? Can she really let him back into her life and make it out the other side?

Read more: Why did Paddy and Rhona divorce in Emmerdale?

Is Pierce dying in Emmerdale?

Even from prison Pierce is still trying to control Rhona when a man turns up revealing the rapist sent him.

He hands Rhona a letter, but despite Vanessa insisting Rhona needs to bin it and never think of Pierce again, Rhona decides to read it.

The letter states Pierce is dying and he wants Rhona’s help finding his long-lost son.

Vanessa again tries to persuade Rhona not to pursue this, terrified Pierce is tricking her to lure her back in.

But Rhona decides to help her ex – and is even keeping Marlon in the dark about it all.

Just to be doubly sure and try to put Vanessa’s mind at rest, Rhona calls the prison. She checks with an officer Pierce is in fact dying and finds out that it’s true.

But it does nothing to calm Vanessa’s fears.

As Rhona searches for Marcus on social media, Ryan offers to help and soon he gives Rhona the number. She calls and leaves a message.

However, when Vanessa finds out, she’s worried sick.

Taking matters into her own hands, Vanessa takes Rhona’s phone and when a return voicemail comes in, she calls Marcus back herself.

Pretending to be Rhona, Vanessa asks him to meet. When Marcus shows up the next day, he has no idea he’s meeting Vanessa not Rhona.

But as Vanessa tells him she made a mistake and to stay away, Rhona finds them together.

Read more: Emmerdale spoilers for next week in all-new pictures

Who is Marcus in Emmerdale?

Fuming Rhona lashes out at her friend for interfering. Marcus interrupts and asks why he’s been summoned.

Rhona fills him in on the situation, but how much will she tell him about her past with his father – and how much does Marcus already know?

Pierce is an evil man. A controller, a manipulator, a violent rapist. Is Marcus a chip off the old block? Or is he the complete opposite?

Is Rhona in danger again?

When asked about the dramatic storyline, Zoe Henry who plays Rhona told Entertainment Daily and other media: “There’s something quite catastrophic that is going to happen in the Dingle/Goskirk household coming up.

“I don’t think that Marlon and Rhona’s world will ever be the same again.”