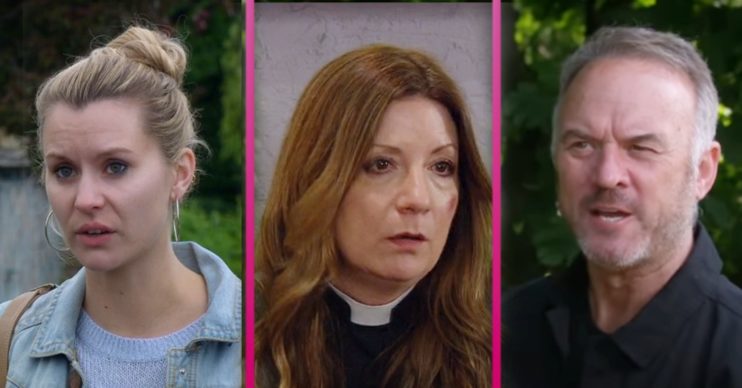 Malone has been harassing Will's family for months

Emmerdale spoilers reveal Dawn learns Harriet has been cheating on Will with dodgy detective Malone. But will Dawn stand by and let Malone get away with tearing her family apart?

Over the last few weeks Harriet has been sleeping with Malone despite being engaged to Will. She recently told her secret lover to back off and decided to go away for a trip with Will, his daughter Dawn and Dawn’s son Lucas.

But when she gets back it looks like Malone will still be determined to break up the couple.

Harriet returns home from her trip away and heads straight back to work to perform a funeral service. However Malone turns up to pressurise the vicar once more.

The next day, aware of her impending visitor, Harriet makes up an excuse to get Will and Dawn to leave.

The reality of the situation hits her like a train and she tells Harriet that she’ll tell Will unless Harriet does it first. The vicar is shaken to realise Dawn means it.

Not long after, Dawn turns up at the police station and informs PC Swirling that she wants to report a launch against a senior policeman.

She realises there’s no going back now.

It was revealed earlier this year that Harriet and Malone worked together when Harriet was in the police force.

He recently attempted to split Harriet and Will up by trying to make it look as if Will was back selling drugs.

But when Will caught him, the two men got into an argument which resulted in Will hitting him over the head with a wrench.

Read More: Emmerdale SPOILERS: Leyla discovers who her tormentor is

Malone went to the vicar for help. Later Will discovered Malone’s badge in the church, but instead of piecing things together, he worried Malone was targeting Harriet.

How will Will react when he finds out about Harriet and Malone?