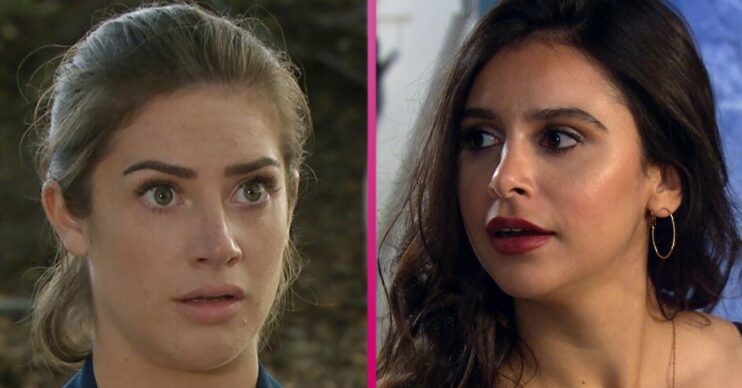 Emmerdale SPOILERS: David declares his love to Victoria – so Meena plots her murder

Their passion could prove fatal

Emmerdale spoilers for next week show murderer Meena preparing to kill Victoria after David admits he loves her.

Meena puts a despicable plan into action after hearing her boyfriend tell Victoria that he loves her too.

At that moment, Meena realises she can’t win unless she puts Victoria out of the picture forever.

The only way to get what she wants is to kill again, and Meena has no problem with doing just that.

Is Victoria about to become her next victim?

Despite Meena’s best efforts to isolate and control David, things keep spiralling out of her control.

She’s told Victoria that David doesn’t want her to visit him and would like her to keep her distance.

The message has hurt Vic deeply, but part of her doesn’t believe what Meena’s saying.

So, she decides to slip into the cottage to hear it from David himself – except his bed is empty.

At first, Victoria panics, wondering what Meena has done to the man she loves.

But when the couple walks into the bedroom, Vic hides and hopes she can talk to David when Meena leaves.

Unfortunately for the hidden Sugden, Meena clocks her and deliberately starts undressing to seduce David.

Victoria is shamefaced as she’s forced to reveal herself before things go too far, and David is horrified that she snuck in.

He orders her to leave, sort herself out and keep her distance, a tirade that pleases Meena greatly.

Do David and Victoria get together?

However, when David and Victoria are thrown together at base camp for the survival challenge, their chemistry is too strong.

Thinking he’s managed to shake Meena off, David covertly confesses to Victoria that he’s in love with her too.

It’s a massive moment for the two friends as they realise the enormity of what’s between them.

But any happiness felt by Victoria looks set to be short-lived because Meena has heard every single word.

Now the race is on for Meena to get rid of Victoria or risk losing her man.

So, as they prepare for the epic survival challenge, Meena’s got murder in mind.

Is Victoria Sugden about to meet her maker?