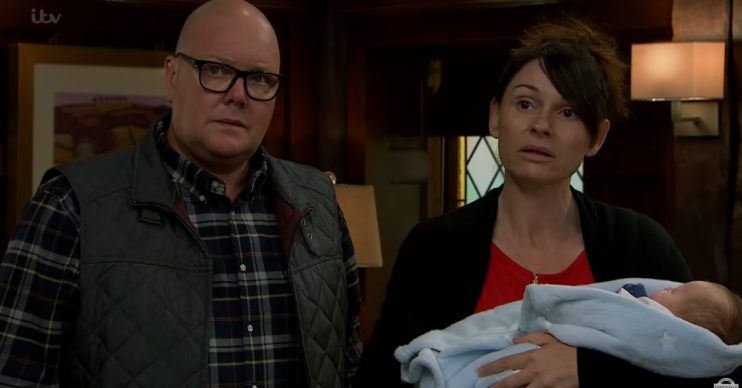 Emmerdale SPOILERS: Chas and Paddy are questioned by social services

Paddy Kirk makes a massive mistake with Eve in next week’s Emmerdale that sees social services pay him and Chas Dingle a visit.

Is baby Eve okay? And will this tear Paddy and Chas apart?

Paddy is preoccupied with best buddy Marlon, who is severely struggling since his release from jail.

With Marlon’s anxiety boiling over, things get worse when two police officers pay him a visit, consuming Marlon with panic.

Paddy notices things aren’t right and suggests they go for a drive with Eve to clear their heads.

But it’s not long before Marlon starts to feel a dull ache in his arm and Paddy panics his friend is having a heart attack.

He rushes Marlon to the hospital and gets him inside to be seen by the medical professionals, but all-the-while little Eve is fast asleep in her car seat…

Paddy has no idea he’s left his daughter alone in the car until some time later when he’s struck by the realisation of what he’s done.

He rushes back to the car, but is distraught to discover Eve is no longer there. Where is she?

A guilty Paddy can’t get over what he did, and Chas is fuming, giving him hell for being so careless and irresponsible.

But when social services get involved, things look set to get even more serious…

Is Eve okay? And will Chas and Paddy be able to prove themselves capable parents despite this incident?

Chas gave birth to Eve last year after the couple lost their daughter Grace exactly a year before.

Grace had bilateral renal agenesis and it was revealed that she wouldn’t survive past birth.

In fact, Chas and Paddy had mere moments with their daughter before she died.

Eve was born in October in the Woolpack toilets.

The couple had thought they were expecting a boy after Paddy’s dad, Bear Wolf, saw the gender test results.

But it turned out Bear had been guessing as he was unable to read.

Chas had a difficult time at first, struggling to breastfeed Eve, but Wendy Posner managed to figure out Eve had a tongue tie and soon Chas was able to feed her little girl.

While Marlon was in jail, Paddy visited him and asked him to be Eve’s godfather.