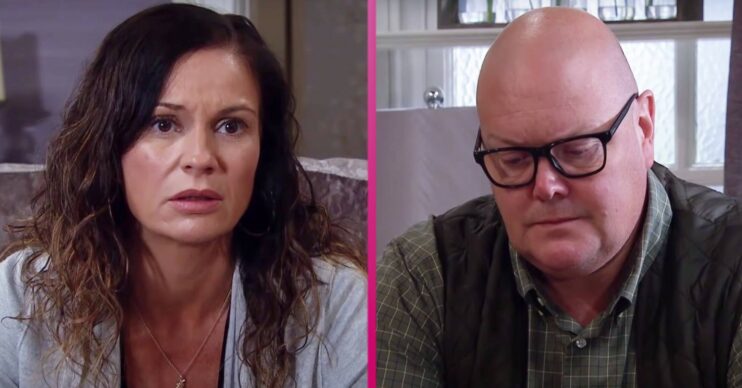 Will Paddy find out?

In Emmerdale spoilers for next week, Chas turns to another man for comfort as she struggles with Faith‘s cancer decision.

Next week viewers see Chas devastated as her mum tells her she doesn’t want to continue with chemotherapy.

Chas reaches out to Cain to help persuade Faith to change her mind, but he lashes out at Dr Liam after discovering he also knew about Faith’s cancer.

As Chas and her relatives battle with denial over Faith’s future, Chas seeks consolation – and it isn’t from Paddy…

Emmerdale spoilers: Sorrow for Sarah as Chas and Cain clash

Chas sways Faith into continuing with her treatment. But Chas can’t seem to see it isn’t what Faith wants.

Meanwhile Sarah is also weighed down by the reality of her great-grandmother Faith not being around. And her upset is intensified as Faith’s illness reminds Sarah about her own condition.

However Cain later spells it out for Chas as they clash over her persuading Faith to carry on.

This leaves Chas feeling guilty after Cain takes her to task for pushing her wishes on Faith.

Faith insists she has made up her own mind when Chas checks she wants to continue with chemo.

But despite trying to put on a brave face, it becomes clear Faith is only doing so for Chas.

Later in the week Faith attempt to make light of her condition, leading to further upset for Chas.

Unable to process the reality of the situation, Chas does not feel supported by Paddy, who, in turn, feels useless and unable to help her.

However, it appears Chas does feel heartened by Al. They open up about their families and he advises her to be more honest with Faith in order to face up to what’s coming.

Chas later apologises for pushing her wishes on Faith, and the pair hug.

But when Paddy takes a wrong step by looking into home hospice options, Chas turns to Al once more.

He suggests she took Paddy’s attempt at helping the wrong way. And when Al suggests they can be friends if she lets him, Chas appears to soften.

A bottle of wine later, Chas stumbles and falls right onto Al’s lips…