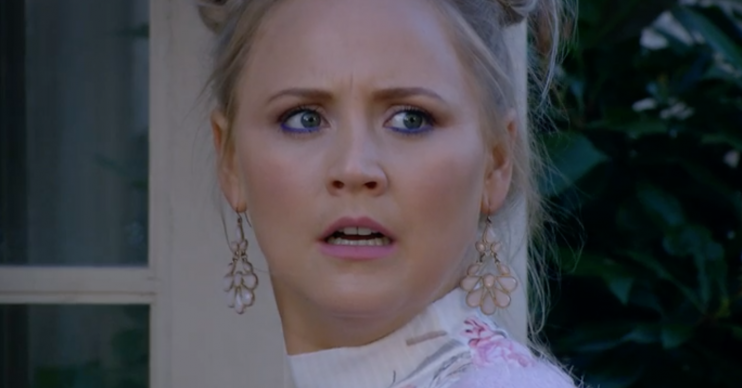 Vanessa wanted her to keep it quiet for a while

Vanessa in Emmerdale is dealing with the double trauma of being kidnapped by psycho Pierce and discovering she has bowel cancer.

As she comes to terms with both, she’s sworn fiancee Charity to secrecy over her illness.

But Charity can’t help but blurt out the truth in tomorrow night’s Emmerdale (Monday, March 9).

It’s the day after Vanessa‘s birthday and Tracy is disappointed with the damp squib celebration that Charity organised in The Woolpack.

So she decides to throw her a daytime house party with all the friends, family and beige food she can lay her hands on in the village.

When Charity arrives home she’s horrified and drags Tracy outside.

“A party is the last thing Vanessa needs right now. Tracy, listen to me, you need to call it off,” she says.

Vanessa spits back: “Do you not care that she’s had the year from hell? Losing Dad, Pierce kidnapping her and Johnny?

“She deserved a special birthday this year, Charity – and you let her down!”

“I’m not trying to spoil things, I’m just saying it’s the wrong thing to do. Tracy, please, you are just going to have to trust me on this,” Charity replies.

“It’s not always all about you,” Tracy hits back. “We’re having this party and there’s nothing you can do to stop us.”

Poor Tracy looks utterly crestfallen. She tries to bring an end to the party before Vanessa arrives, but it’s too late.

When Vanessa discovers that Tracy knows the truth she runs off, but the sisters eventually have a heat-to-heart.

Charity then feels left out and she ends up fighting with Tracy, leaving Vanessa to try to remedy the situation.

Hardly what she needs from the two people closest to her in her time of need!

Charity only recently learned about Vanessa’s illness, something the vet was really worried about sharing with her.

Ahead of the news breaking, Vanessa actress Michelle Hardwick warned Inside Soap magazine: “Charity’s reaction is everything that Vanessa fears – she just panics.

“Charity keeps her distance from Vanessa, which only makes her feel more alone than ever.

“She just wants Charity to tell her they can get through this together.”

Emmerdale next airs at 7pm on ITV tomorrow, Monday March 9.