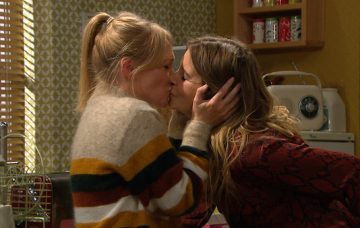 Will their day run smoothly?

It’s a big week for Emmerdale’s Graham Foster next week when he is killed off in a dramatic whodunnit, but it’s also a huge week for fan favourites Charity Dingle and Vanessa Woodfield as they plan to tie the knot in a secret wedding ceremony.

Charity and Vanessa have had a rocky romance, with the pair splitting towards the end of last year after Charity’s lies got too much for Vanessa to handle.

The split came after Vanessa discovered Charity had been secretly working with Mandy Dingle in her casino heists, and when Charity failed to tell the whole truth about her involvement when given the chance, Vanessa called time on their relationship.

Charity was heartbroken and vowed not to give up on Vanessa, and thankfully for all Vanity fans across the country, the pair reunited a few weeks later.

And it seems the couple are keen to make things official as they plan to get married in a secret wedding next week… but sadly Graham’s actions leave their big day hanging in the balance.

When Charity drags a reluctant Sarah, Noah and Ryan home from the grand opening of the Hawkford Outdoor Pursuits Centre, the family are baffled by her odd behaviour, oblivious to what she has got planned with Vanessa.

The brides are desperate for their big day to remain a secret and desperately gather their family around so they can tie the knot with everyone present.

But when Graham asks Ryan to syphon off more of Kim Tate’s money, drama starts to unfold.

When Ryan refuses to help Graham, Mr Foster doesn’t take kindly to being told no, and hulimates Ryan by locking him up in the kayak shed in a bid to stop him going to Kim to tell her the truth about the missing money.

But when Charity wonders where Ryan is, she is livid to find Graham is holding him hostage and is fuming that Graham has ruined her wedding day.

After tracking down her son, Charity is on a mission to confront Graham for what he has done. But when they have a confrontation, Charity sees red when Graham belittles her and vows revenge.

But as Charity ropes Ryan in to her plan to make Graham pay for his actions, will she end up going from bride-to-be to cold-blooded killer all in the same day?

Do you want to see Charity and Vanessa get married? Leave us a comment on our Facebook page @EntertainmentDailyFix and let us know what you think!