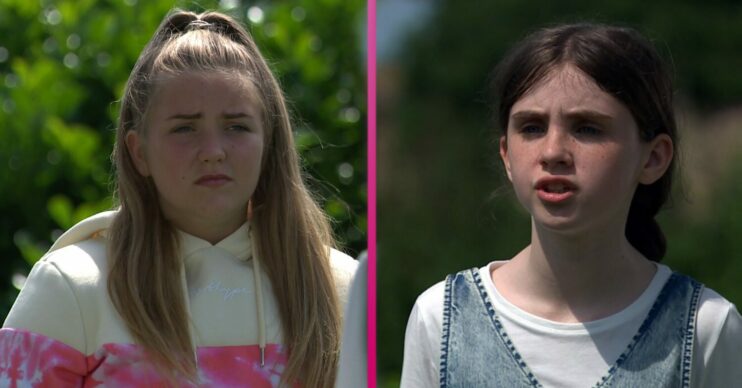 All hell breaks loose in the family

Emmerdale spoilers for next week show the shocking moment Cathy confesses to April that she’s behind the vicious trolling campaign.

She breaks cover after April’s despair sends her spiralling, and Cathy is scared she’s destroyed her.

But once the truth is out there, the whole family get involved – leading to a violent showdown on Main Street.

Rhona and Brenda end up having a fight that leaves one of them injured.

Can the family get over this horrible chain of events?

For months, nasty Cathy has been secretly trolling April online.

What started as a bitchy prank has become a full-blown hate campaign.

But next week, Cathy sees the consequences of her malicious actions as April breaks down in terror, believing her troll is coming for her.

It’s already a horrible scenario, but when April skips school to stay safe, Cathy knows she’s got to be honest.

April can’t believe it when Cathy confesses everything and admits that she was the person who started this nightmare.

The furious youngster gives Cathy both barrels before heading off home.

The next day, she tells Rhona everything, and a horrible battle ensues.

The Hope clan is terrified when Heath reveals that Cathy has run away from home for fear of what will happen.

She’s quickly found by Rhona, who demands that she tells Bob, Brenda and the school what she’s done to poor April.

But frightened Cathy tries to make a run for it, and Rhona grabs her – as Brenda spots the altercation.

She rushes across to release her step daughter from Rhona’s grip, only for the two women to end up tussling instead.

Rhona tries to get Brenda off her but accidentally catches her in the face with her elbow.

When Brenda goes for her again, Rhona shoves her to the floor, and it’s a horrible spectacle as the hurt café owner lands roughly.

The shocking incident creates a massive divide as Bob wonders how he’s ever going to make peace between their fractured family again.

Can everyone forgive each other, or is the family drama just beginning?