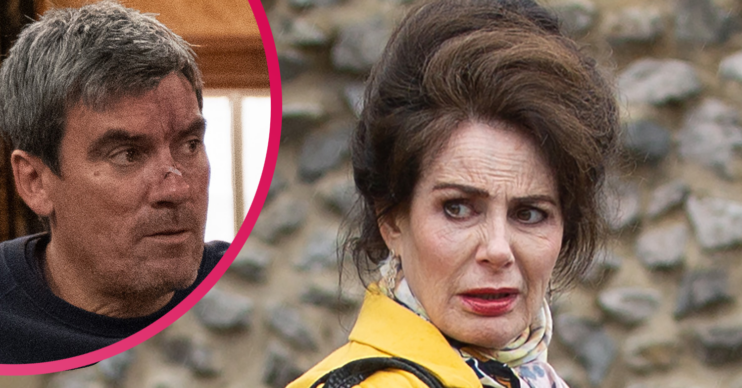 Cain wants his mother out of his life – for good!

Emmerdale spoilers for next week see Cain Dingle unleash a torrent of abuse at his mum, Faith.

Faith has been desperate to make amends with her son, and it seemed a couple of weeks ago she was even beginning to make some progress.

However, Faith’s ill-advised bunk-up with Dan in the allotment shed soon found Cain once again disgusted by his mum.

But things soon went from bad to worse for Faith.

Faith responded to Cain’s rejection in the only way she knows how – by channeling her pain through outrageous behaviour.

After Cain told her where to go, Chas also told her to get lost.

Deciding to get out of town, Faith waited at the bus stop, but soon unleashed her frustration at Ameila, who has been blanking her since Faith slept with her dad.

As things got heated, Faith lobbed one of Amelia’s weights through the glass in Dan’s door.

Moira realises Faith may have finally taken things too far.

Next week’s Emmerdale spoilers reveal that Faith will once again try and build bridges with Cain.

This time, however, she gets an even worse reaction.

Faith in the future

Despite being hurt by what Cain says, Faith doesn’t give up on her apologies.

Read more: Emmerdale tonight: Charity horrified as she walks in on Chloe and Noah

She approaches Dan to say howe regretful she is about that happened.

But will she get a better response than she got from Cain?

Moira to the rescue?

Meanwhile Moira is concerned about the feud between Cain and his mum.

But have things gone too far for Faith ever make things right?