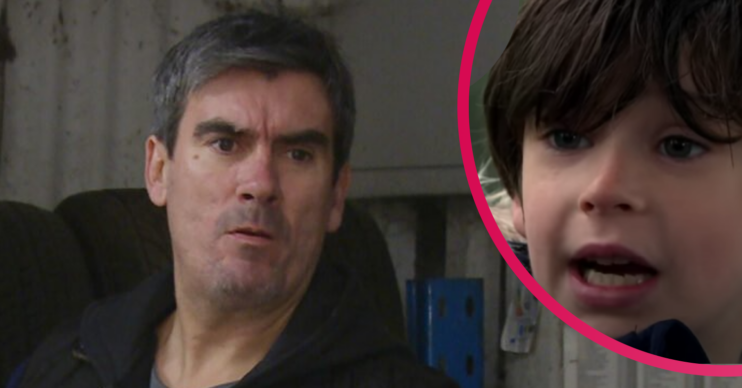 Emmerdale spoilers: Cain kills his own son in frenzied pursuit of revenge?

But is it really his fault?

Emmerdale spoilers for tonight have revealed Kyle is in danger once again as he gets caught in the crossfire of the Dingle/Chapman war. But is it all Cain‘s fault?

After the brakes on Al’s car were cut last night (Wednesday, January 19), the question remains: who did it?

Has Cain taken it a step too far? And will he pay the ultimate price for his act of revenge?

Chas left with nothing

Chas has discovered her insurance claim on the Woolpack is void as they never declared the development plans.

Realising she has no choice, Chas agreed to sign over Woolpack ownership to Al, but refused to go ahead when she discovered the price had dripped by £20k.

Chas is fuming, but then Cain ripped up the contract and things got worse.

Mackenzie then got involved and managed to steal Al’s phone.

Emmerdale spoilers: Will Kyle get in Al’s car?

Meanwhile, as Al was talking to Mack and Chas, a darkened figure was seen in the shadows cutting the brakes on Al’s car.

Cain is thrown when he spots them approaching the leaking car. Is that because he was the one who cut the brakes? Or because he recognises a fault when he sees one?

Can he stop them before they get in the vehicle? Or has Cain killed his own son by accident?

Also tonight, once Mack has unlocked Al’s phone, Cain and Mack meet with Gavin on a country road.

They make it clear they’re not big fans, but is Gavin a bigger fish than either of them?

Will he run scared from Cain? Or will he take revenge in an even worse way?

Why does Chas disown Cain in Emmerdale spoilers?

Chas realises she has no choice by tonight but to agree to Al’s lower offer.

She makes him promise to end his feud with Cain if she signs the papers.

But when Gavin pulls out of the deal after Cain’s threats, all is lost.

It’s not long before Chas has disowned Cain.

Can he make amends with his family before it’s too late?