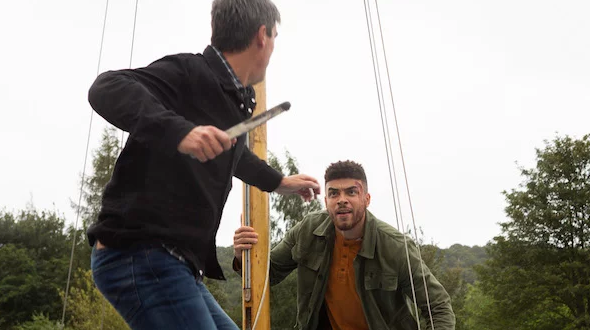 Cain Dingle finally discovers the truth about Moira Dingle and Nate Robinson’s forbidden affair in next week’s Emmerdale and it’s not long before he’s soon planning the most terrifying revenge.

After Faith discovered that Moira is hiding something, she has become convinced that her daughter-in-law is having an affair.

But while she might be right about the fact Moira is cheating on Cain, she has got the wrong end of the stick and thinks Pete Barton is the man the farmer is playing away with.

After deliberating over whether to tell Cain the truth, Faith eventually spills the beans and tells him that Moira is cheating with Pete.

A murderous Cain is fuming and vows revenge on Pete… and to get Moira out of the way while he deals with Pete, Cain sends her and Nate away to a agricultural show.

Little does he know, he’s sending his wife away with the man she has spent the last few months secretly sleeping with!

With an oblivious Moira out of the way, Cain lures Pete to the farm and promptly knocks him unconscious. Pete is terrified when he wakes to find he has been tied up and is bleeding… and it’s not long before the realisation dawns on him that Cain thinks he’s been sleeping with his wife.

As a panic-stricken Pete tries to reason with Cain, his words are falling on deaf ears and in the end he blurts out the truth that it is Nate who is having an affair with Moira, not him.

Cain is fuming, but instead of rushing to confront the cheating pair, he plans the ultimate revenge with impeccable detail and the following day he heads to the hotel where an unsuspecting Moira and Nate and waking up in bed together.

The pair panic when Cain shows up at the hotel and before they know what is happening, he has got them bundled into the car and they soon pull up at a lakeside pier.

Cain tells the terrified pair that he is taking them on a fishing trip and ushers them onboard a boat.

But as soon as they set sail all hell breaks loose as Nate admits to the affair and a murderous Cain launches himself at the farmhand in a fit of rage.

Cain clearly intends to finish Nate off for good, but while the pair are fighting Moira gets pushed overboard and becomes trapped in weeds underwater.

As Moira fights for her life in the lake, Cain and Nate continue to fight and a petrol can tips over, causing the boat to suddenly explode into a huge fireball.

Has the explosion just killed both Nate and Cain? And with no one aware that Moira is also in danger, could she drown before anyone rescues her?

Who do you think could die in the explosion? Leave us a comment on our Facebook page @EntertainmentDailyFix and let us know what you think!