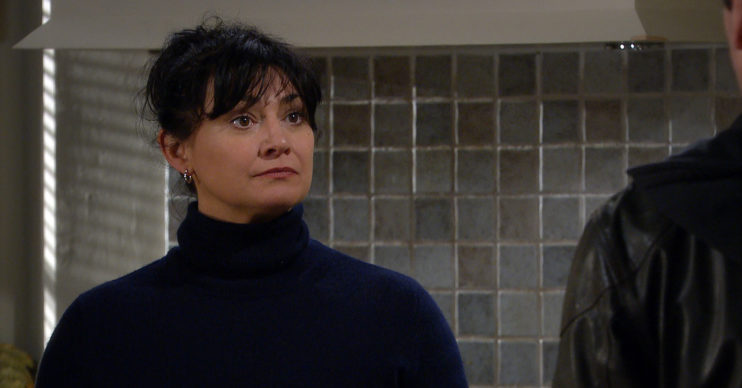 Emmerdale SPOILERS: Cain and Moira have a moment

Could this interrupt their divorce plans?

In next week’s Emmerdale, Cain and Moira share a moment. Could this lead to them reuniting?

After discovering Moira’s affair with Nate Robinson last year, Cain ended his relationship with his wife.

Although the pair are still civil for the sake of their children, Cain has made it clear he wants a divorce.

Next week, the former couple continue to talk about their divorce. However they soon they slip back into easy banter and end up having a laugh and joke with one another.

But as they share a moment, an argument shatters things. What does this mean for Cain and Moira?

Reunion for Cain and Moira?

Recently Cain actor Jeff Hordley hinted at a reunion for Cain and Moira during a This Morning interview.

When asked by Holly Willoughby if there’s a chance of the former couple getting back together he said: “I think there’s always the potential for a reunion with these two because they’re so in love, so yeah.

“And it would be nice I think, you know in these times now to see some happier things on the show and show some positivity.”

A recent Emmerdale trailer also shows Cain and Moira messing around together. As the pair play fight, Moira falls back into a chair and Cain falls on top of her.

An affair for Moira and DI Malone?

Aside from dealing with a divorce, Cain is having to put up with corrupt cop DI Malone. Malone has had Cain, Will and Billy working and doing illegal jobs for him.

However, Malone actor Mark Womack has hinted there could be an affair ahead for his alter ego and Moira.

Revealing to TV Times who he’s been talking to during the coronavirus pandemic, Mark said: “I text Jeff [Hordley] quite a bit and also Jay [Kontzle] and Dean [Andrews] and I’ve had conversations with Katherine [Dow Blyton].

He then added: “There’s a nice little thing brewing for Malone and Moira. There’s a little teaser for you.”