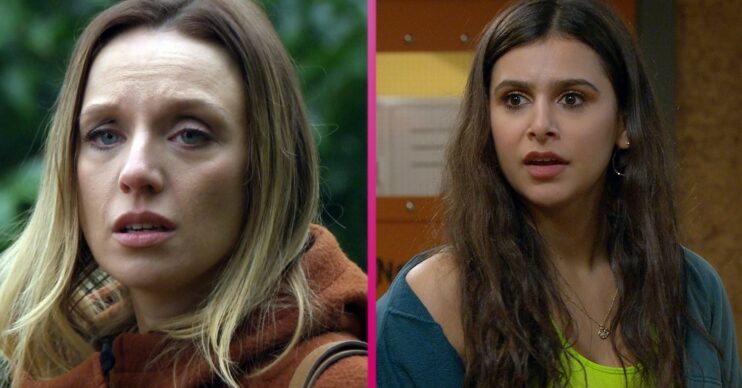 She's bitten off more than she can chew with Meena

Anna has played Andrea for two years and, while she has faced off against villains like Kim Tate, Meena is something else entirely.

Emmerdale fans have watched as Meena has displayed some terrifying behaviour since arriving in the village.

Emmerdale SPOILERS: What has Meena been up to?

Meena pretended to be Ethan Anderson’s long-lost mum in a sick texting scam to reunite him with ex-stepmum Manpreet Sharma.

She also tried to kill Andrea’s dog Princess by locking her in a hot car – and framed her for the “accident”.

And now Andrea actress Anna has admitted EVERYONE in Emmerdale should fear Meena.

Speaking to Inside Soap, she said: “Everyone in the village should be worried! Who knows what Meena is capable of?

“Andrea feels like Meena’s a bit unhinged and tries to give her a wide berth. But she’s unaware of anything Meena’s done, and doesn’t think she has any reason to meddle.

“Andrea’s just trying to avoid drama – so unless her relationship is threatened or her daughter is threatened, then she’s not going to weigh in. But the minute that happens, she’ll be straight on the case!”

So is Meena Jutla a murderer?

Earlier this month it was revealed Meena was involved in a woman’s mysterious death.

Speaking to Diane Sugden, Meena claimed she had regrets over not helping a troubled friend more.

She said her friend Nadine later took her own life after falling in with a bad crowd.

She insisted they were gradually chipping away at Nadine’s confidence and making her unhappy, forcing her to step in.

But when Nadine rejected her help, Meena claimed she backed off.

However, Nadine was later found dead and Meena struggled to cope – claiming she decided not to go to the funeral.

And she never confided in her sister over what happened.

However, it was clear Meena hadn’t been honest with Diane.

Later, she was seen reading an old newspaper clipping about Nadine’s death, which revealed the truth.

The headline of the newspaper read: “Woman found dead in suspicious circumstances.”

Another section of the article read: “Nadine Butler, aged 22, was found dead in her car yesterday after inhaling carbon monoxide fumes. Police suspect foul play and are appealing for witnesses.”

But could Meena be a killer? You’ll just have to tune in to find out!