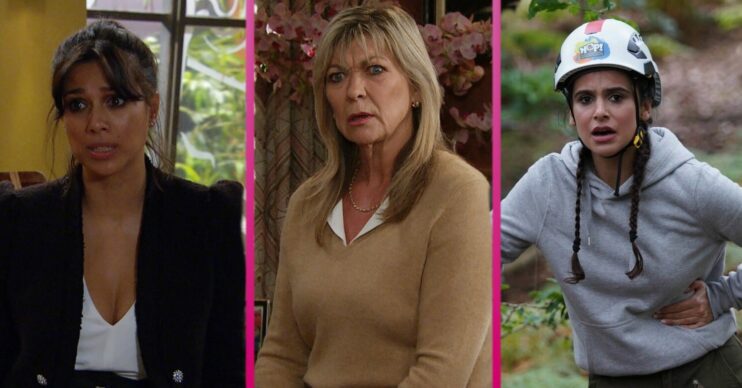 Emmerdale SPOILERS: An arrest is made

But who is in handcuffs this time?

Emmerdale spoilers for next week promise that one villager will be arrested following the tragic survival challenge death.

Police are swarming at the Home Farm estate following the horrific news that one of the participants has been killed during the event.

The identity of the deceased is being kept firmly under wraps, but it’s safe to say their demise will have huge repercussions.

Many people could be suspected of having blood on their hands – including owner Kim, killer Meena, and organisers Priya and Ellis.

But who do detectives believe is responsible for the shocking tragedy?

She’d overheard boyfriend David tell Vic that he loved her and intended to dump Meena.

But her plotting went wrong when the safety harness she’d tampered with was taken by sister Manpreet, not Victoria.

Did Manpreet pay the ultimate price for Meena’s machinations, or was Vic her victim after all?

Who died, and who survived?

Charity was also in trouble after it looked like she’d disappeared under the water.

Mack was desperate to save her, but we don’t know if he succeeded.

Meanwhile, Charles, Ben, Andrea, Ellis and Priya were also caught up in the drama as the challenge turned into a nightmare.

Read more: Emmerdale: Who is Fiona Wade married to? When did Simon Cotton appear on Emmerdale too?

As the organisers, you’d think Hawksford will be under investigation for their role in the catastrophe.

Or perhaps the case is more clear-cut, and detectives have rumbled the serial killer in their midst.

Is Meena finally going to be held accountable for her crimes, or will somebody else be staring at four prison cell walls?