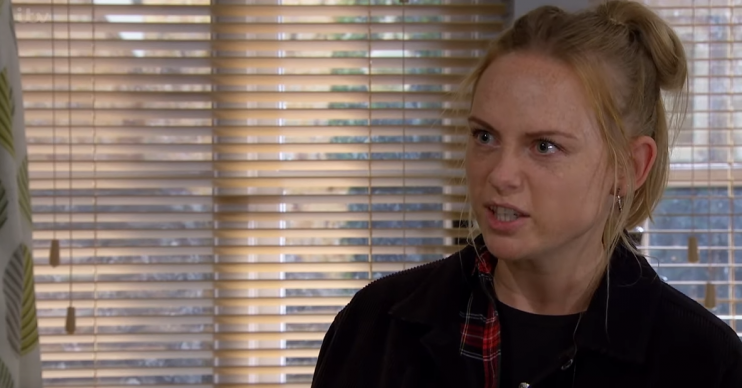 Kerry and Amy are responsible for the fire that killed Frank

In a preview for Monday night’s episode, Amy returns to Tug Ghyll cottage to collect some overnight things for hospitalised Kerry, but runs into the women at the house.

Vanessa quickly tells Amy she can’t believe that she and Kerry started the factory fire and kept it quiet.

But when Amy says she isn’t looking for a fight, Vanessa persists saying: “Oh I bet, you’ve managed to duck the truth for so long you must’ve thought you got away it. But you’re going to have to face up to it now.”

Amy tells her she’s been facing up to it for weeks but Tracy questions her, asking how they’re meant to be believe her when she hasn’t had the guts to admit what she did.

But Amy soon calls Tracy out and says: “Oh you’ve got a cheek, after what you did to my mam.”

Charity steps in to defend Tracy saying Kerry deserved what happened to her.

Vanessa soon jumps back in asking Amy if she felt ashamed when she heard people calling Frank a thief.

When Tracy tells Amy she should’ve told the truth, Amy kicks off again at her mum’s housemate.

She says: “You blame us for not owning up to what we did when you’re just as bad. Trying to cover up what you did to my mam.”

But Vanessa steps back in to defend her sister saying Amy and Kerry were the ones covering after stealing from a charity and killing Frank.

She tells Amy that Kerry just had an accident.

Read More: Emmerdale fans convinced Manpreet will be the village’s next killer

But Amy refuses to back down and says Kerry was pushed and ended up in hospital thanks to Tracy. She also says it wasn’t an accident but assault.

She then threatens to go to the police saying they should ask them what they think.

Viewers know Kerry and Amy have spent weeks covering up the fact they started the fire at the factory which killed Frank.

Kerry even went so far as to frame Frank for the whole thing, but the guilt was getting to them and they planned to leave.

However, Tracy found out the truth and confronted her.

As Tracy tried to run away, there was a scuffle and Kerry fell, hitting her head on some rocks.