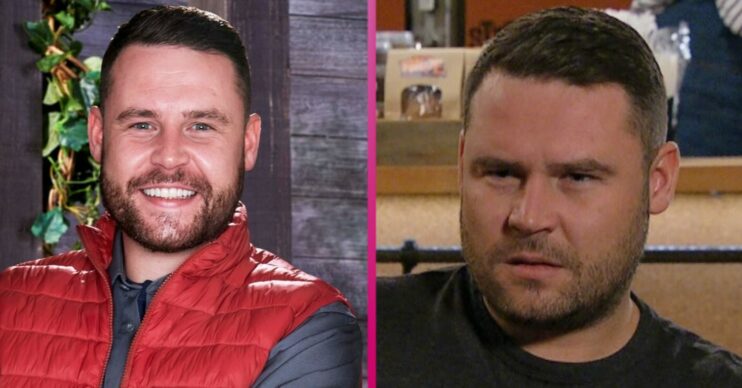 Actor Danny Miller has quit the role of Aaron Dingle

Emmerdale appears to have revealed Aaron Dingle’s exit storyline – but is there more to it?.

The mechanic is set to leave the village in the coming weeks after actor Danny Miller revealed he had quit the soap.

Now a spoiler video shows the moment Aaron decides to leave for good as he prepares to move with boyfriend Ben.

However in a furious row with his alcoholic sister Liv, Aaron discovers she has tried to sabotage his Ben’s chances of getting a new job away from the village.

Disgusted with Liv, Aaron therefore tells her he’s done with her.

Read more: Is Kerry leaving Emmerdale already as she plots her exit?

But more than that – he tells her he’s leaving the village with Ben so she can fend for herself.

Will the pair go on the run and escape the village forever? Or will something more tragic befall them?

It has already been revealed that Ben will discover proof that Meena Jutla tried to murder Victoria Sugden.

She was filmed by a head cam – but no-one has seen the footage.

Until that is next week when Ben finds it – and he’s left in a terrifying cat and mouse game.

As a result of the discovery Meena races to stop him revealing the information and the pair fight. Meena’s left unconscious on the floor – but is she dead?

Will Ben have to flee a murder charge too? And will Aaron go with him?

Actor Danny Miller made the shock announcement he has quit Emmerdale this week.

The actor opted to leave the show to take advantage of the offer to appear on I’m A Celebrity.

Speaking at a press roundtable, Danny said: “I’d like to think I’m very, very far away from Aaron and that’s part of the reason why I wanted to do [I’m A Celeb].

“I’ve actually left Emmerdale. I unfortunately decided to start a new path in life. I’ve got my baby now and I’m [getting] married next year. It felt like the right time to open a new chapter in my life.”

However it was clearly a tough decision for Danny to make as he teared up over it.

“I’m very very emotional about it actually, it’s been a massive part of my life,” he added.