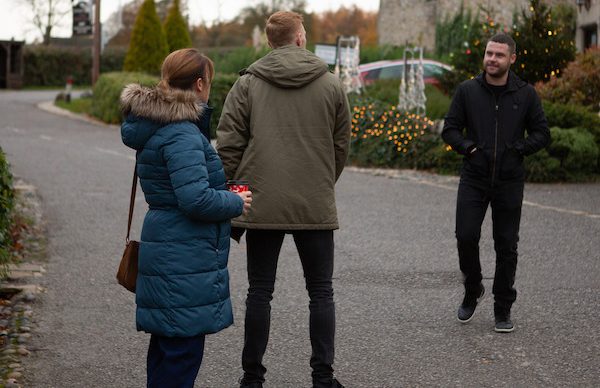 Is he going down the same path as Robert?

The drama begins when Aaron continues his plan to intimidate Lee’s mum Wendy Posner out town, still fuming that she had the audacity to move to the village where Lee’s pregnant rape victim, Victoria Sugden, is living.

While Bob Hope might be showing Wendy some neighbourly warmth since she has arrived in Emmerdale, not everyone is happy to see her put down roots in the village and Aaron is on a one-man mission to drive her out of her new home.

As he lurks in the background, watching her every move, Wendy is spooked to say the least.

But when Aaron then turns up at the doctors’ surgery where she works and claims he has an appointment with her, she is seriously scared.

Luke isn’t happy when he finds out Aaron has been targeting his mum and the pair have a fight in the street, leaving it up to Wendy to pull the men apart.

But that’s not the end of Aaron’s torment, Wendy later thinks she is being followed in the car and puts her foot down in a bid to get away from whoever is targeting her.

Wendy is convinced that it’s Aaron who is driving behind her, but is she right?

Deciding that Luke needs to be taught a lesson, Aaron gets into his house and waits for him to arrive home… and not surprisingly Luke is horrified when he walks through the front door and finds Aaron staring back at him.

As the pair talk, Aaron gets more and more angry and as his rage builds he approaches Luke with a golf club, murderous intent in his eyes.

But will he go the same way as his husband and end up in prison for attacking someone with a weapon?

Do you think Aaron will kill Luke? Leave us a comment on our Facebook page @EntertainmentDailyFix and let us know what you think!