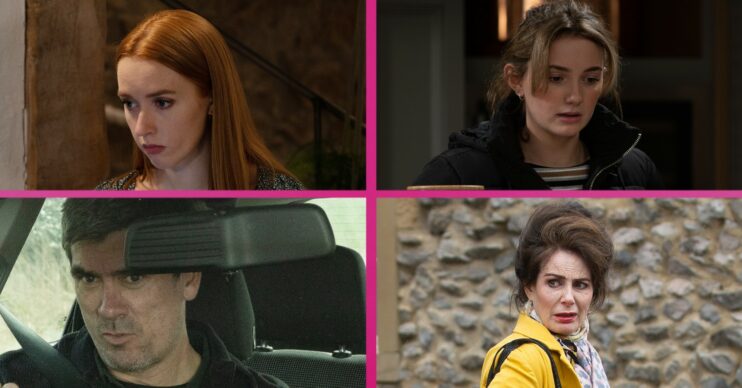 Next week is set to be dramatic

Next week is set to be a dramatic week with potential returns and a terrifying hostage situation.

But what is going to happen?

At the end of tonight’s Emmerdale episode, flashforwards teased what’s coming up in next week’s episodes.

As Noah said goodbye to Chloe, a flashforward showed Noah telling someone: “You’re going nowhere till you’ve calmed down.”

Meanwhile Gabby approached Billy and asked if Dan found anything on CCTV. He told her no but the cameras were up and running.

A flashforward showed Gabby yelling out: “If you’re here Jamie I’m not scared.”

Across the village Faith was on the phone to an unknown person.

Her flashforward showed her telling someone: “You don’t just get to rock up and tell me what to do because I won’t do it. I can’t do it, okay? Just leave me alone.”

And finally Al went to pick his car up from Cain’s garage, who he’s been feuding with for months.

Al checked the price and told him he was waiting for bad part. Cain told him some things just run their course.

A flashforward showed Cain saying: “We’re done here. This is over.”

It the cut back to Cain in the present and he told Al: “Or maybe it’s just the calm before the storm.”

What is going to happen next week?

Next week Jacob is frustrated that no one seems to believe him.

Victoria decides to hear him out and Jacob tells her he thinks Noah pinched Chloe’s keys and journal.

Meanwhile Chloe agrees to hang out with Noah at his, but privately she’s still upset about Nate.

Things seem to be going well with Chloe and Noah when she finds her lost keys at his.

She confronts him and he lies his way out of it, but Chloe is still panicking.

Before long she sends Noah out to get some snacks and when he’s gone she goes through his laptop.

Soon the scales fall from her eyes as her fears are confirmed. She finds evidence making it clear Noah has been stalking her.

Noah is full of joy when he returns with the snacks.

Chloe confronts Noah and he reacts badly by trying to stop her taking the laptop and attempts to trap her in the house.

Charity is appalled to walk in on the terrifying scenario.

When Billy and Dawn admit there was a hooded person on the CCTV, Gabby is terrified, knowing she’s home alone all day.

Dawn tries to reassure her but Gabby’s instincts are telling her Jamie will return to take Thomas.

Gabby tries to keep a watchful eye and before long she finds a dropped torch outside.

She panics when she checks the CCTV and sees a hooded figure looming in the woods. But is it Jamie?

When Gabby finds a gift for Thomas, she goes cold knowing it has been left by Jamie.

Soon Home Farm’s gun cupboard is broken into and an anonymous hand reaches in and takes a shotgun.

Al’s annoyed Cain has returned his car. After finding a cable tie securing the drive shaft in the engine, he guesses Cain has further sabotaged the car.

Al tells Cain to prove it’s safe by driving it and Cain agrees.

He drives the car at full speed down Main Street straight at Al. Neither man looks set to budge as Al holds his nerve standing in front of the speeding car.

Cain screeches to a halt in the nick of time. But is this the end of their feud?

Faith tries to make things up to Cain, but her attempts just unleash a torrent of abuse from her son.

Even Charity tells her to get lost.

Faith is soon desperate to get somewhere fast and when the bus fails to show up, she gets annoyed and picks a fight with Amelia on the street and offends her.

On a roll, Faith makes things a lot worse for herself when she throws one of Amelia’s dumbbell weights and throws it at the window on Dan’s door.

Moira stands and watches, appalled. How will Faith makes amends?