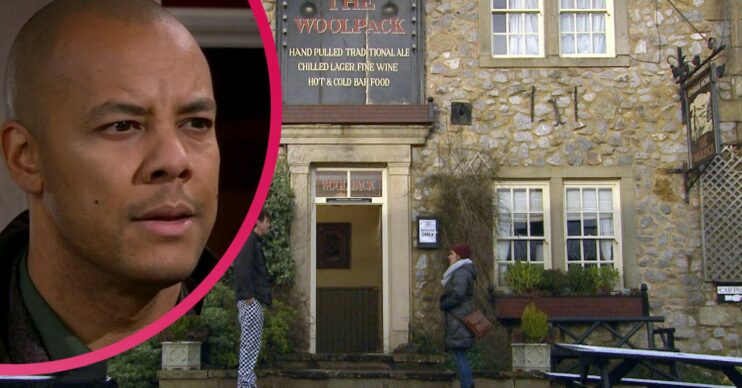 Emmerdale SPOILER: Woolpack to burn down in Christmas horror?

Christmas won't go off without a hitch in the Dales

Emmerdale looks set to be rocked by a devastating fire at Christmas.

The village’s pub, The Woolpack, will be left burnt out and boarded up after the festive blaze, reports the Metro.

According to the publication, the Woolie will be shut down after the inferno.

Viewers already know the pub is at risk after Al Chapman blackmailed his way into buying a share of the struggling business.

And fans discovered earlier this month how he is planning to shutter the pub business and turn the building into luxury apartments.

He won’t be doing it alone either.

It comes after it was revealed Footballers’ Wives star Ben Richards has joined the cast. He will play Gavin, an associate of Al Chapman.

But could Al burn the pub down? Will Gavin help him?

An ITV Christmas preview of the soap certainly teased that the businessman is getting desperate.

The soap teased: “It’s the season of good will, but the underhanded Al Chapman goes sparing on dishing out any joy, particularly when he is feeling under so much pressure.

“Will Al find a solution for his financial problems or could his world collapse?”

The tease also reveals changes for some characters with Harriet Finch “hopeful”.

However the Dingles aren’t so lucky.

The teaser adds: “With Sam Dingle (James Hooton) desperate to make things better, can he reunite them at this time?”

Meanwhile with Meena Jutla still killing people, there’s a dark feeling of danger in the village.

“The sense of a threat from within the Village still looms large, but it is now Dawn (Olivia Bromley) who needs to watch her back?

“But could there be other villagers in danger before the week is over?”

There will also be a Christmas proposal in Emmerdale – but it will be over shadowed by jealousy.

ITV adds: “It is likely to be an emotional Christmas for Dr Liam Cavanagh (Jonny McPherson) given it’s the first without daughter Leanna.

“But when he enjoys a little too much wine a drunk Liam is rescued, but could he find himself in a dangerous situation?

“As the dust clears it is soon apparent this will be a Christmas the villagers will never forget, leaving some things changed forever.”

Emmerdale say they do not comment on storyline speculation.