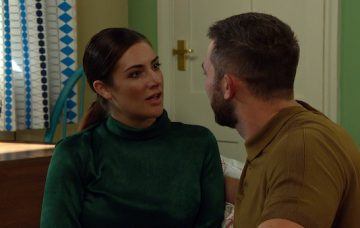 Emmerdale SPOILER: Victoria in danger as she moves on from Adam

She's determined to prove a point to her family, but it could all end in tears

Emmerdale’s Victoria Barton finds herself in trouble when she goes on a date. Brother Robert manages to save her, but will she learn her lesson?

The chef’s been struggling ever since she discovered the truth about her estranged husband Adam going on the run to protect his mother.

Vic had thought he’d murdered Emma Barton, so had cut all ties with him.

After trying to track him down without success, she’s determined to prove to her family – and the Bartons – she’s moved on, so she sets up a date with Leon the drayman. But he’s not the nicest guy and she soon finds herself in danger…

After some encouragement from Marlon, Ellis is led to believe he’s the one going on a date with Vic, but he’s left embarrassed when it turns out she’s actually going out with Leon.

Leon’s reputation precedes him though, and Matty Barton and Diane Sugden try to persuade Victoria to give him a wide berth. She won’t be put off and is determined to prove she can make her own decisions and doesn’t need to be protected.

Aware all eyes are on her, Vic flirts up a storm before leaving with Leon after Diane and Matty try to intervene.

Back at her place, things start to heat up and they enjoy a passionate snog. But Vic’s heart really isn’t in it.

However, she’s determined she’s going to be reckless and not care about the consequences, so she continues to kiss him.

Leon thinks his luck is in and starts pushing her to take things further.

Realising this isn’t what she wants, Victoria pushes him away, but he’s not impressed. Nasty Leon become verbally abusive, scaring Vic who doesn’t know what to do.

Fortunately, Robert has been informed of what’s going on and has arrived to split up the party. He gets there in the nick of time and throws Leon out.

Aware she’s been a fool, will Victoria thank her big brother? Or will this make her even more determined to live her own life without anyone interfering?

Vic’s understandably found all the lies surrounding her hubby’s departure a bitter pill to swallow and is going off the rails trying to deal with it.

She was starting a romance with Adam’s brother Matty, but Moira stopped them in their tracks with her killer confession.

Emmerdale fans have demanded Moira be locked up for murdering Emma, but so far, Victoria seems to be keeping quiet over the secret. But that doesn’t mean she’s forgiven…

Should Victoria forgive her family? Leave us a comment on our Facebook page @EntertainmentDailyFix and let us know what you think.