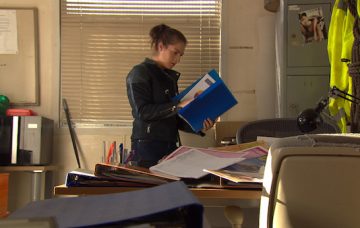 She's on a mission to find her missing husband

Victoria Barton is a woman on a mission next week as she becomes obsessed with finding missing Adam’s location.

Vic recently found out that her estranged husband didn’t actually kill Emma Barton as everyone has let her believe for the past year.

She was shocked to discover that he was actually covering for mum Moira who was mentally unstable at the time and wouldn’t have coped in prison.

Moira confessed all the Vic when she walked in on her snogging Adam’s brother, Matty.

Since then Victoria has been determined to make Moira pay for her crime, but as that didn’t work, she’s now got a bee in her bonnet about tracking Adam down herself.

She breaks into the haulage yard in a quest for clues and her brother Robert is alerted when he discovers the crime and an empty file named ‘European Trips.’

When Robert tries to explain to Vic that no one knows where Adam is, a guilt-ridden Aaron watches on.

Robert is shocked when Vic tells him that she’s decided to hire a private investigator to look for Adam and has already paid him to start the search.

Later, Robert and Matty are floored when Aaron tells him Adam was in touch recently and is currently in Budapest.

But when Victoria tells him her PI – Glen – has tracked Adam down in Portugal, Robert realises that something isn’t adding up.

Glen demands Victoria pay him £5000 for his work, which she’s more than happy to do, but when Robert gets wind of it he’s horrified as Vic os clearly being conned.

As Victoria heads off to meet Glen and pay him, Matty manages to slip the envelope of cash out of her bag.

But now everyone starts to panic that Victoria might be in danger from this dodgy detective.

Matty, Aaron and Robert try to track her down as Vic frantically searches for the money in her bag.

Glen begins to lose his patience and when the boys get to Vic’s location, all they find is her phone.

Are they too late?

Is Victoria ok? Leave us a comment on our Facebook page @EntertainmentDailyFix and let us know what you think!