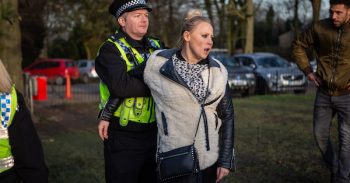 How will she talk her way out of this one?

Tracy Metcalfe finds herself on the wrong side of the law next week when she gets arrested following drama with Billy Fletcher.

Despite Billy and Tracy’s new romance being in the very early stages, it looks like the pair could finally find some happiness together.

Even a misunderstanding thanks to Maya and her lies wasn’t enough to rock the pair… but next week might be a a different story as big drama hits the couple.

Read more: Emmerdale’s Graham finally confesses who killed Joe – or does he?

As they head to the park to pick up April, Tracy heads off to buy some coffees as they wait for Marlon Dingle’s daughter.

But as Billy waits for his new stepsister, someone doesn’t like the look of him hanging around the children’s playground alone and calls the police.

When Billy tries to get April’s attention to let her know that he’s there to get her, the police approach him.

The officer reveals they’ve had a call from a parent reporting him acting suspiciously around the kids, and Billy is mortified.

He struggles to remain calm, and after his recent experience in prison, he knows he needs to keep his cool and tries to cooperate with the police officer.

But when Tracy gets back with the drinks, she sees red and flies off the handle.

She’s convinced that this is a racist attack on Billy, Tracy confronts the parent in question and things soon go from bad to worse when she finds herself getting arrested for standing up for Billy.

Poor April is left totally bemused as Tracy is cuffed, but Billy just wants the ground to swallow him up, desperate for this drama not to get back to the village.

But once home, it doesn’t take long for what happened at the park to get out, and Jessie opens up to Marlon about the prejudice that her and her sons have had to face throughout their lives.

Billy is fuming that everyone knows what happened and he’s convinced that estranged brother Ellis is the one who let the cat out of the bag.

Slamming his brother against the wall, he threatens him – not realising that Tracy has seen the whole thing.

But how will she feel about Billy now she has witnessed his violent side?

Could this be the end of their romance before it has even begun?

Do you think Billy and Tracy could make a good couple? Leave us a comment on our Facebook page @EntertainmentDailyFix and let us know what you think!