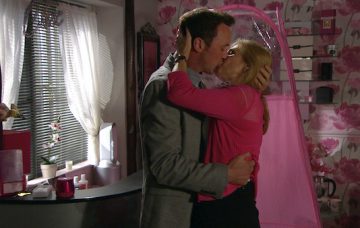 Is Bernice's secret about to be revealed?

Bernice is left feeling torn next week when she fails to end her relationship with Daz – and she’s caught romping with Dr Cavanagh.

Daz isn’t in a good place as his search for work continues to prove fruitless and when he breaks the news that one of his old friends has died, Bernice can’t bring herself to dump him.

In fact she ends up comforting him instead of finishing with him – which totally wasn’t the plan at all!

Later, at the salon, Kerry tries to make some extra money by doing secret tans behind Bernice’s back.

But as she prepares Jimmy King – don’t ask – for a spray tan, they hear the door unlocking and hide in the spray tan tent.

The next thing they know Bernice and Liam enter the salon and start kissing before Bernice drags Liam upstairs.

Later Kerry and Jimmy arrive at the Woolpack and are horrified when they see Daz is already there.

They realise that Bernice must have been with someone else and is cheating on Daz.

The next day Kerry decides she needs to confront Bernice about her actions.

Will it lead to the affair being outed and heartache for poor Daz?

Bernice and Liam have been secretly romping for the past couple of weeks, despite Bernice saying she wouldn’t take things too far before she’d dumped Daz.

The beautician has been going off Daz recently and has had her head well and truly turned by Dr Cavanagh.

The dishy doc has been single since splitting up with wife Maya, who is now shacked up with David Metcalfe.

Bernice and Dr Cav have been eyeing each other up for weeks while Bernie has grown more and more mortified by Daz’s antics.

The pair flirted up a storm when Bernice called him to her salon after Faith Dingle had a funny reaction to one of the face creams the beautician had used on her.

To thank him, Bernice offered Liam a free treatment and he gratefully accepted a haircut, with sparks flying as Bernice ran her fingers through his hair.