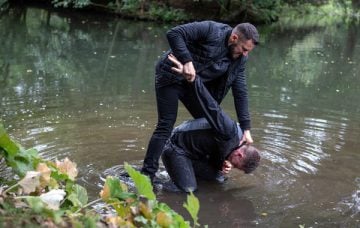 He finally gets his showdown moment with Simon

Troubled Ross Barton finally gets the chance to exact revenge on the man who ruined his life next week.

Fans of the ITV soap know that drug dealing local wrong’un Simon McManus was responsible for the vicious acid attack that left Ross scarred for life.

Since the terrible incident Ross’ life has started unraveling unbelievably with him getting hooked on drugs and – at one point – even dealing himself.

But his relationship with Rebecca White seemed to give him a new lease of life – only then she disappeared and Ross thought she’d chucked him so he got back into crime – selling dodgy cars – and drugs.

Even now Rebecca is back and the pair look set to properly reunite later this week, Ross sees red when he hears that Simon is back.

Scoring some more drugs from Gaz, he grabs a holdall which he stuffs with duct tape (there’s always duct tape isn’t there?), rope and plastic ties before getting ready to head up to Home Farm to fulfil his mission.

But he’s apprehended by a suspicious Moira who seems to have worked out his plan and tries to talk him out of it.

He manages to put her off the scent though and soon Ross and Simon are face to face – what has Ross got planned?

He’s about to attack Simon when Moira – not as dumb as she looks eh Ross? – arrives and tries to talk sense into her nephew again.

But Ross remains undeterred and drags Simon to the edge of the lake.

How will this end? And will Ross get the truth he needs for closure from Simon?

Should Ross kill Simon? Leave us a comment on our Facebook page @EntertainmentDailyFix and let us know what you think!