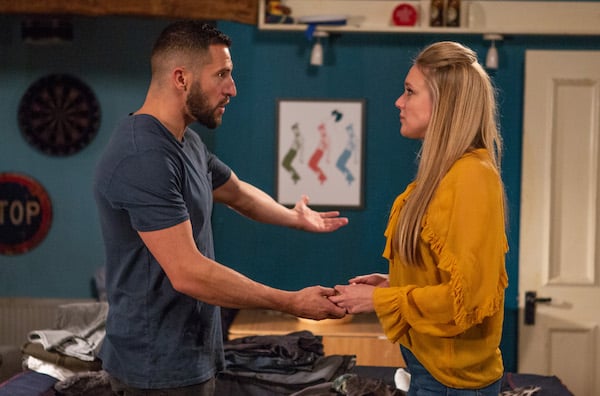 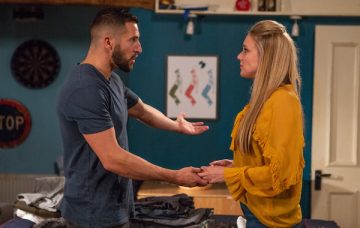 The couple are looking forward to a fresh start

Ross Barton and Rebecca White leave their friends shocked when they announce their plans to leave the village.

The couple – who recently got back together following Rebecca being held captive by her murderous nephew Lachlan – will be seen deciding to make a fresh start later this week.

Read more: Emmerdale Ross to die of an overdose?

They start telling people that they’re off and gear themselves up to tell Charity, Robert and Aaron that they’re planning on taking their kids, Moses and Seb, with them.

But before they get a chance to Robert overhears a conversation that riles him.

It soon looks like Ross and Rebecca’s plan to leave with the kids is shot down in flames when Charity tells Ross that Moses is going nowhere.

Charity, Robert and Aaron all join forces and tell Ross and Bex that they won’t be leaving with Moses and Seb.

As the bad feeling grows Rebecca suggests to Ross that they wait a few months before leaving.

Bex then changes her mind about going at all, wanting to stay until the situation with the kids is sorted.

Ross still wants to go though and is prepared to leave without Rebecca or the kids.

He says some emotional goodbyes to his friends around the village. But will Ross really leave without Rebecca?

Mike Parr who plays Ross announced he was quitting the role he’s played for five years back in May.

Addressing his 204,000 followers, he wrote: “Yes I’ll be leaving the soap soon. Have had the best few years at Emmerdale but it’s time to move on and explore other avenues.”

He joked: “If I win that soap award I might stay though.”

One wrote: “To be honest, they never should have done the acid story line with you. Your character was obviously never gonna be the same again. Which would have been a big shame. I’m gonna miss watching you in Emmerdale. Good luck with whatever you do next.”

Another fan was “gutted”, while one responded with: “Well that’s just pants.”

Will you be sad to see Ross Barton leave Emmerdale? Leave us a comment on our Facebook page @EntertainmentDailyFix and let us know what you think!