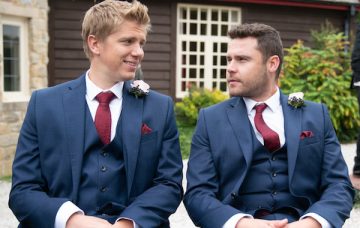 They FINALLY make it official. Yay!

Aaron and Robert are set to make an army of Robron fans delighted next week when they finally make their marriage official.

But – as this is a soap wedding – the road to the altar is not a smooth one.

At the beginning of the week vicar Harriet Finch calls round to see Aaron’s mum Chas to talk about the funeral of her baby daughter, Grace.

As they talk, Chas insists that Aaron and Robert’s wedding should go ahead, leaving her partner Paddy Kirk concerned.

Aaron calls round later and says he thinks they should postpone the wedding, but Chas is adamant that it goes ahead.

She tells her son that she needs this happy event in her life after losing Grace so tragically.

But as the day of the wedding comes round, Paddy worries about how Chas will cope.

Meanwhile Robert gets ready while trying to convince Victoria that Aaron is really sorry for lying to her about Adam killing Emma.

Victoria is determined to put her brother before everything else that day and agrees to attend the wedding.

Later Robert is hugely touched when Aaron hands him his old watch which he’s had engraved with the dates of their two weddings.

The pair then head off happily to get wed in front of their family and friends in a pagoda outside the village hall.