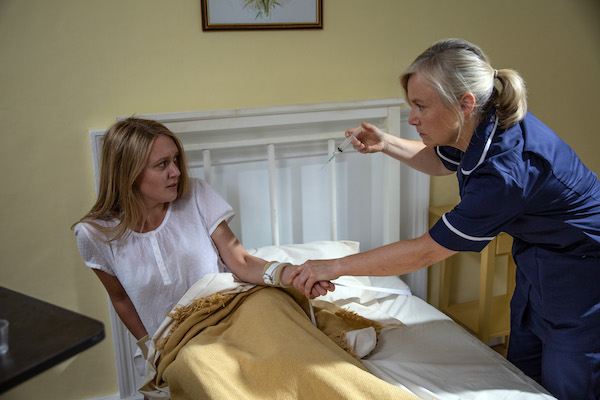 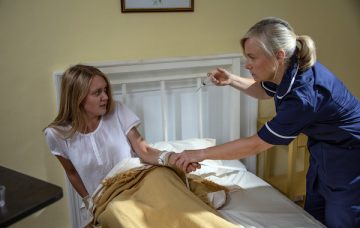 Lachlan confesses she's alive but will Robert get there in time?

Robert Sugden comes face to face with Lachlan White in Emmerdale next week as he tries to convince the teen killer to tell him what he’s done with Rebecca.

We’re all still reeling from the shock revelation that Rebecca has avoided death at the hands of Lachlan AGAIN and is currently being held somewhere with some creepy nurse.

And that nurse gets even creepier at the start of the week when she tries to reassure Rebecca that her ordeal will be over soon, while approaching her with a loaded syringe.

What IS going on here?

Meanwhile Robert pays Lachlan a visit in prison and the murderer toys with him, telling all about how he planned to kill Robert and Liv.

But Robert is stunned when Lachlan tells him he didn’t kill Rebecca so he implores him to tell him where she is.

Outside the prison Robert jumps into his car and speeds off, desperate to get to Rebecca.

But when he reaches the room where Rebecca was being held, he’s horrified to find she’s gone.

All that’s left are the chains and the old hospital bed Rebecca was being held on.

Worse still, there are signs of a struggle and blood spatters. Robert calls the police close to breaking point.

Later, Lachlan is confused when the police tell him that Rebecca wasn’t at the address he gave.

He insists that he didn’t kill his aunt but his words fall on deaf ears.

Back in the village, Robert now believes Rebecca to be dead and the villagers raise a glass to her.

An emotional Robert later gets a call from a frantic Lachlan who insists that he left Rebecca with a nurse – but will Robert believe him?

And where in the heck are the nurse and Rebecca now? And is Rebecca still alive?

Is Rebecca going to make it through this one? Leave us a comment on our Facebook page @EntertainmentDailyFix and let us know what you think!