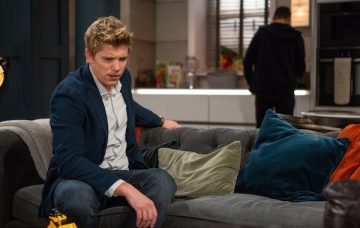 Is the pitter patter of tiny feet on the cards?

Aaron Dingle and Robert Sugden’s wedding had fans rejoicing earlier this month as it finally seemed they were in a happy place.

But could that happiness be rocked when Aaron decides he wants a baby of their own?

The couple have been caring for Robert’s baby with Rebecca, Seb, while she recovers from her brain injury. It’s given Aaron food for thought and he now realises a little person is exactly what he and Robert need to complete their family.

He decides to talk to his husband about having a baby leaving Robert completely shocked. Clearly having had no idea Aaron was even considering this, Robert doesn’t know how to react.

Aaron has it all figured out though and reveals they’re going to find a surrogate to carry their child for them.

Robert smiles and nods, but when Aaron walks away his facade drops and it looks like he’s really not keen on the idea at all.

Aaron is so set on it though he heads off to tell Chas what they’re planning, excited to tell her she might soon be a grandma.

But just as he’s about to reveal the good news, Robert steps in and stops him.

Aaron realises immediately that his hubby’s stalling for time.

Does Robert feel it’s not the right time? Or does he just not want a baby at all? And how will Aaron react when he finds out how Robert really feels?

They do have baby Seb, so perhaps Robert feels one is enough – although with Rebecca wanting to take him away, his role in the couple’s life looks uncertain.

Rebecca wants to leave the village with her fella Ross Barton to make a fresh start with their kids.

But Charity, Robert and Aaron all join forces and tell Ross and Bex that they won’t be leaving with Moses and Seb.

As the bad feeling grows Rebecca suggests to Ross that they wait a few months before leaving.

Bex then changes her mind about going at all, wanting to stay until the situation with the kids is sorted.

Should Aaron and Robert have a baby? Leave us a comment on our Facebook page @EntertainmentDailyFix and let us know what you think!