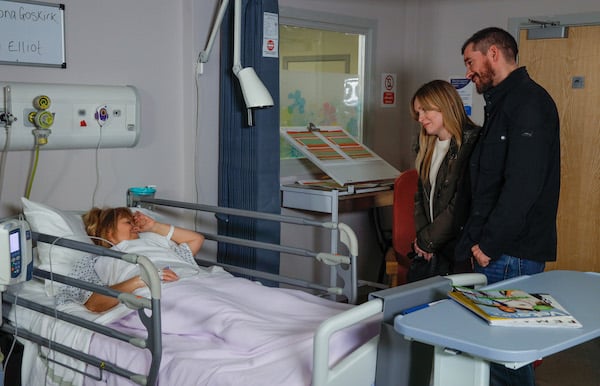 Emmerdale SPOILER: Rhona has her hysterectomy

Can Pete win her back?

It’s the day that Rhona Goskirk has been dreading, but next week sees the vet undergo her hysterectomy following her accident at the farm.

Emmerdale fans will know that Rhona was left in a bad way after being crushed by hay bales during an accident when boyfriend Pete Barton lost control of a tractor.

Poor Rhona was dealt the devastating news that she would have to have a hysterectomy after the accident, something that she has been dreading ever since.

She then threw boyfriend Pete out, convinced that he wouldn’t want to be with her any more now that she can’t have any more children.

As the day of her operation arrives next week. Rhona is terrified and her anxiety about the procedure stars to get the better of her.

Pete is desperate to be by Rhona’s side at the hospital, and Vanessa urges him not to give up on their relationship.

As Rhona goes in for the operation, Pete and Vanessa wait for news about how she is getting on, both wanting to be there when the vet wakes from her anaesthetic .

When a groggy Rhona comes round, Pete is by her side and reassures her that her and Leo are all the family he needs.

But will Pete manage to win Rhona around, or is this the end of their relationship for good?

Things are set to get even more complicated when Pete later gets an urgent call from Moira Dingle at the farm.

She is worried about the insurance following the accident, and with her and Paddy at loggerheads over who is right or wrong, it seems Moira could be about to lose everything.

Do you want to see Pete and Rhona back together? Leave us a comment on our Facebook page @EntertainmentDailyFix and let us know what you think!