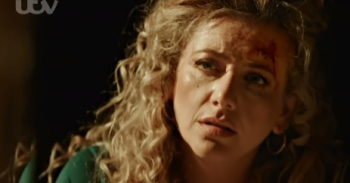 Time is up for the evil teacher

Maya Stepney will be exposed soon on Emmerdale but could she be murdered after the secret is out?

The teacher has been grooming her pupil and boyfriend’s son Jacob for months, and next week it’s all set to be exposed when they are caught together.

It all comes about when Maya cruelly rejects David’s marriage proposal when he tries to take their relationship to the next step.

But when she rejects him he falls into old habits and ends up drunkenly kissing ex Tracy Metcalfe.

Unable to control herself, a furious – and hypocritical – Maya seeks solace in the arms of her schoolboy victim.

But when one of David’s pals finds them together during the dramatic Big Night Out week, all hell will break loose.

Actress Amy Walsh, who plays Tracy, hinted that Maya could be murdered after being discovered, saying: “Maya’s caught with Jacob by one of the girls and news travels fast.

“Initially, they don’t believe as a group what’s been seen is the truth, not that one of us is lying, but that there must be some explanation.

“As soon as they realise what’s happening, they want to get her on her own and hear the truth. It gets a bit crazy and I can’t say too much more.”

Tracy is horrified to discover her former step-son being abused by Maya and the pair will soon come to blows.

Amy added: “It comes as a shock for Tracy because she considers Jacob as a step son. She’s very protective of him and she really loves him and he’s been good to her in the past. Also, she’s been completely duped as there’s been several times that Maya’s lied to her.”

Read more: Emmerdale want ‘freeloader’ Kerry axed after she is kicked out by Dan

“Tracy’s shown kindness in looking after her when she was ill and her relationship with Billy ended because of a lie Maya told,” she added.

“So there’s all of that going through her head. The sheer amount of time it’s gone on for is unbelievable and quite emotional for Tracy. She’s hurt, upset and baffled by it.”

How do you think Maya will get her comeuppance? Leave us a comment on our Facebook page @EntertainmentDailyFix and let us know what you think!