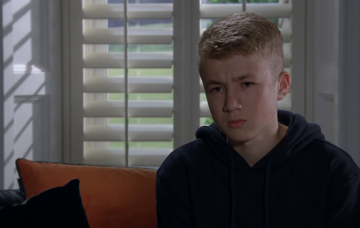 There is nothing Kim won't do for revenge on the Dingles

Kim Tate is going to take disturbing revenge on the Dingle family in Emmerdale by kidnapping Noah.

Schoolboy Noah is going to be left terrified and running for his life as Kim puts her evil plan into action.

In a new spoiler released for next week Noah will beg Cain to save him as he frantically runs for his life in the Home Farm woods.

After going to see Graham at the mansion, he doesn’t return home and instead texts Cain with a plea to help him.

The message reads: “I’m in Home Farm Woods and I’m scared and lost. I think someone’s after me.”

Cain immediately panics and tells Moira he has to go and find him.

“Noah’s in trouble,” he says. “He says he’s up at Home Farm and someone’s after him.”

But as Moira insists Kim wouldn’t sink so low as to hurt a child, Cain reminds her of what she did to her own step-grandson Joe.

He says: “Well Joe was her step-grandson just like Noah same as Noah and she wanted her dead. Wait here. I’ll call you in a bit.”

With that he rushes out to save his little cousin from whatever hellish scheme Kim has cooked up for him in an effort to get back at the Dingles.

It was revealed last week how Graham Foster would be left disturbed by Kim’s plan to use Noah against Cain after deciding to destroy him.

She discovered how Cain had murdered Joe and not Graham, after Graham lied to her about what really happened.

Kim decided Cain was too much of a threat to her freedom to be allowed to live and promised to silence him for good.

Could she have kidnapped Noah to lure Cain into a trap and finish him off for good?

Do you think Kim has killed Noah? Leave us a comment on our Facebook page @EntertainmentDailyFix and let us know what you think!