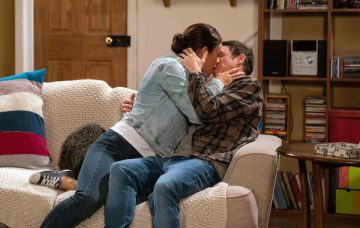 What will she say when she spots Victoria smooching her husband's brother?

Moira Barton is in for a shock when she walks in on Matty and Victoria snogging the faces off each other next week.

The pair get passionate after Victoria challenges Matty about his feelings and after a heated exchange, they end up kissing passionately.

But they’re quickly brought down to Earth when Matty’s mum Moira catches them and reminds them that Victoria is still married to her other son, Adam.

Victoria takes her turn to remind Moria that Adam is on the run for murdering Emma Barton and she doesn’t think he’ll be heading back to the village in a hurry.

Moira has a shock of her own though when she finally reveals the truth about what happened to Emma.

Fans of the ITV soap know it was Moira and not Adam who killed Emma, last year and that Adam is taking the blame to keep his mum out of jail.

Moira snapped after Emma tried to kill her in a fire, only stopping because Moira went into labour with a baby she didn’t even know she was expecting.

Emma then stole the baby from hospital believing him to be her grandson following Pete Barton’s fling with Moira.

When Moira was faced with Emma standing on the viaduct while she accused her of killing daughter Holly, Moira snapped and pushed her over the edge.

Up until now the only people who know the truth are Adam, Cain, Ross and Pete.

Matty and Victoria are left reeling by the revelation, but what will it mean for their blossoming romance now Vic knows Adam isn’t a murderer after all?

Matty Barton is no stranger to secrets, having transitioned from female to male without telling any of his own family – not even mum Moira.

But later this week, he finds out that his mum has secrets of her own.

In scenes due to air on Thursday (20 September), Matty’s suspicions are aroused when he overhears a conversation between Moira and step-dad Cain at Butler’s Farm.

And it becomes clear that they are discussing something secretive within the family.

He demands they tell him the truth… But will they?

The ‘secret’ couldn’t come at a worse time for Matty, played by Ash Palmisciano, as he’s just starting to feel settled in the village again.

All will become clear in upcoming episodes, but Emmerdale fans know they are more than a few skeletons in Moira’s closet.

For example, the truth about Emma Barton’s murder and the real reason for Adam’s departure – that Moira actually killed Emma, but Adam took the blame.

Matty and Moira have had a rocky relationship ever since he returned to the village.

Moira struggled to accept that her daughter Hannah had been ‘replaced’ by Matty, and even continued to call Matty ‘her’.

What will Victoria do now? Leave us a comment on our Facebook page @EntertainmentDailyFix and let us know what you think!