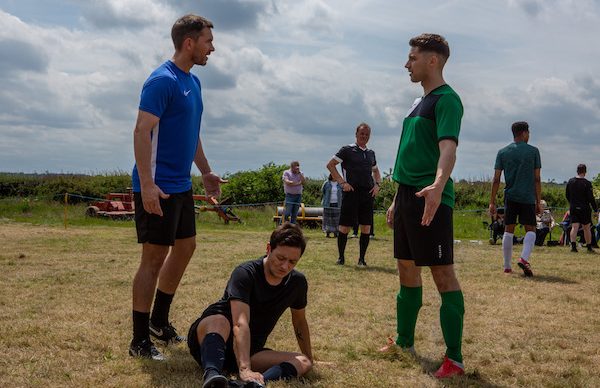 He's in for a tough ride

A game of football leaves Matty Barton at the mercy of a couple of local bullies in Emmerdale (July 25 2019) as the transgender lad tries to win their respect.

It’s a devastating setback for Matty who has settled into the village since his 2018 return – even overcoming the prejudices of his own mum Moira – after transitioning from her daughter Hannah to her son.

“Matty is feeling more like himself,” Ash Palmisciano, the soap’s first trans actor who plays him, tells ED!. “Then he meets these bad boys Ste and Jonno who are playing in a rival team.

“Matty feels that he has to be more like them to be a ‘proper man’ so he goes on a bit of a mission. It taps into this whole toxic masculinity thing.

“Basically he’s going through something that most lads go through aged 12 or 13 – trying to figure out how to act with other lads.”

When Matty is shoulder barged by the opposition’s defender Jonno, Pete acts over protectively and risks outing his cousin.

Matty gets frustrated and, when Ste and Jonno invite him for a drink, he overcompensates by trying to impress them.

“He knows he doesn’t want to be acting like this,” says Ash. “But he’s never had a group of lad mates before. He’s desperate for people to hang round with him and validate him, and so he goes down this dark path.”

When Amy reveals to Matty that Victoria Sugden is leaving for Cornwall to start a new life away from rapist Lee Fodor with their unborn baby the situation gets much worse as a bitter Matty lashes out.

Not thinking straight, he shames Victoria in front of his new drinking pals and is cruel to her again the next day when she tries to make things right between them before she goes.

What Matty doesn’t realise is that his new so-called pals don’t actually have his best interests at heart and are looking to destroy his life.

“Matty thinks he’s doing the right thing knocking around with these guys, but actually they’re taking him for a bit of a ride,” says Ash. “That’s the really sad thing about it. They’re just taking the mick out of him and using him to get what they want.”

Ash says he understands the problems of peer pressure.

“I think everybody goes through it at school at some point,” he says. “When you’re growing up you just copy everyone else.

“It’s a bit of a hot topic. The way lads can behave to each other can be very toxic, not showing emotion or talking about feelings.”

For Matty Barton the question is just how far down this dark path will his new ‘mates’ lead him?