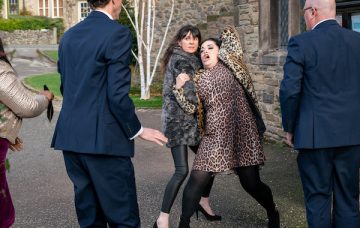 Marlon and Jessie's official wedding is thrown into chaos when Mandy arrives...

There’s heartache on the horizon for an already troubled Chas and Paddy when Mandy Dingle makes a surprise comeback. But why has she really returned after all this time?

It is the moment Emmerdale fans have been waiting for, legendary Mandy Dingle is back on Monday 7th January. But while viewers might be pleased to see her, the same can’t quite be said of the residents of Emmerdale village.

As Marlon and Jessie’s official wedding gets underway (their Christmas Day nuptials weren’t legally binding) the pair are disappointed when April says she won’t be there and so can’t be their witness.

After scouring the village for someone suitable, the pair decide to rope Jimmy in to do the honours alongside Paddy… but when Mandy makes a shock arrival, it sees Jimmy’s services are no longer required.

Marlon’s speechless at the sight of his cousin standing before him – but nothing can compare to how Paddy feels when he comes face-to-face with his former wife.

Despite the wedding being so rudely interrupted, the ceremony continues, this time with Mandy in the role of witness… something that leaves poor Paddy feeling more than a little uncomfortable.

But while Paddy’s getting over the shock of seeing his ex after all this time, Chas is feeling vulnerable and is leaving the vet voicemails asking him where he is.

Deciding to track Paddy down herself, Chas isn’t happy when she sees he is reminiscing with his ex, and it doesn’t take long for a fight to break out between the women.

As jealous Chas attacks Mandy, the pair have to be torn apart.

Thankfully they make up eventually, but Mandy is in for a shock when someone lets slip about Paddy and Chas’s recent heartache over baby Grace.

With this devastating news now on her mind, will Mandy be able to reveal why she is really back in the village after all this time?

While what is behind Mandy’s return remains a mystery for now, it seems that isn’t the only secret she has been hiding.

How will the Dingles feel when they discover Mandy also has a 16-year-old son… and more to the point, who is the dad?

With Paddy and Mandy married when she eventually left the village, could her child also be Paddy’s son?

Or is it more likely that the college lecturer who Mandy had an affair with while she was married to Paddy be the dad?

Do you think Mandy and Paddy should get back together? Leave us a comment on our Facebook page @EntertainmentDailyFix and let us know what you think!