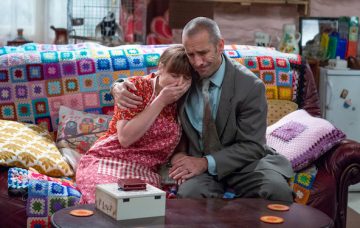 What will she tell him?

Lydia Hart reveals a devastating secret to Sam Dingle next week when she reveals why she couldn’t go to baby Grace’s funeral.

The whole village is in a sombre mood as Chas and Paddy get ready to lay their little girl to rest.

When the day arrives Chas is in bits as she goes through Grace’s memory box.

Her brother Cain soon arrives and Chas is overwhelmed with emotion as he comforts her.

Chas then tells him that Paddy has organised and planned everything for the funeral and Cain becomes concerned that Chas has lost faith in her daughter’s send off.

Paddy then arrives to tell Chas that Grace has arrived and they head out to say a final goodbye to their little girl.

Outside the couple are amazed to see their family and friends lining the streets of the village.

Chas and Paddy then begin their long walk to lay their baby to rest.

But they’re not the only ones who are emotional about saying goodbye to Grace.

When Lydia can’t bring herself to go to the funeral, Sam wants to know why.

He’s left shocked when Lydia makes a heartbreaking confession of her own. What will it mean for the couple?

Lydia and Sam’s relationship was rocked earlier this year when Lydia had a cancer scare.

She had to have a biopsy on a suspicious mole on her leg after taking a fall down the stairs.

Luckily Lydia got the all clear, but it led to her briefly leaving Sam as she couldn’t bear to put him through a cancer nightmare after losing his wife Alice to the illness over a decade ago.

Fans were also intrigued about Lydia’s past when she came face-to-face with a woman called Pat at the hospital.

Let us know what you think of Lydia and Sam by leaving us a comment on our Facebook page @EntertainmentDailyFix!