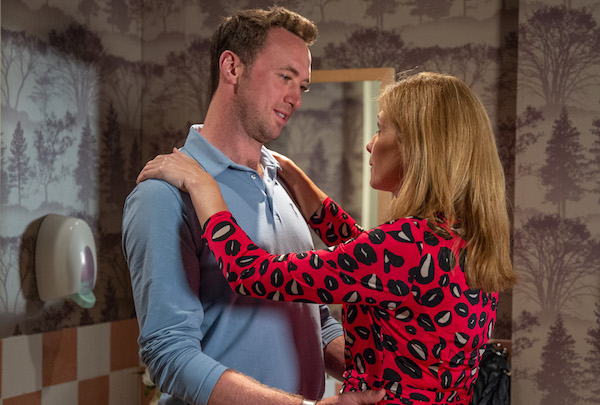 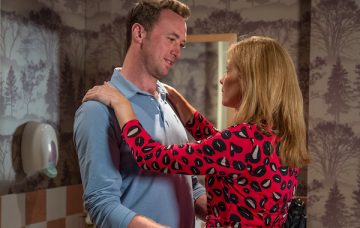 Is this the end of the line for the loved-up couple?

Liam Cavanagh and Bernice Blackstock look like they could be on the rocks already after Gabby Thomas and Leanna Cavanagh cook up a plan to break them up.

The teenagers decide they can’t bear their parents being together any more and decide to intervene… but will their sneaky plan work?

Gabby sets the ball rolling by telling doctor Liam that her mum, Bernice, expects commitment from their relationship, leaving him feeling uneasy about how serious their romance is getting so quickly.

Meanwhile, Leanna is also doing her bit by telling Bernice that the dress she has chosen for the gala isn’t right.

Planting the seed that she needs something far more glamorous, Leanna ends up sending poor Bernice running all over town, trying to find herself the perfect outfit for the big event.

But, of course, what she has chosen originally was far better than what she ends up arriving in…

When Bernice arrives at the Woolpack later that evening, everyone is shocked to see her wearing a bright red prom dress… but if the humiliation of wearing the ridiculous outfit isn’t enough, Bernice is mortified when she realises Leanna has totally set her up.

And after being made to look like a fool by her boyfriend’s daughter, Bernice is then left even more red-faced when she blames Leanna for tricking her and Liam sides with his daughter.

As Gabby comforts her mum in her moment of need, she’s left feeling guilty for the part she’s played in the whole scenario… but will Bernice work out that her own daughter was in on the scam too?

And with Liam siding with Leanna, could this be the end for Bernice and the dishy doctor already?

Do you think Liam and Bernice make a good couple? Leave us a comment on our Facebook page @EntertainmentDailyFix and let us know what you think!