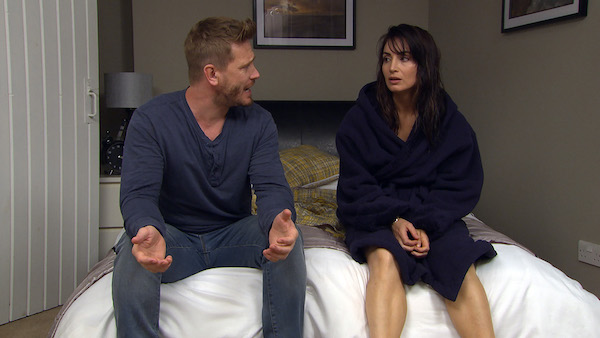 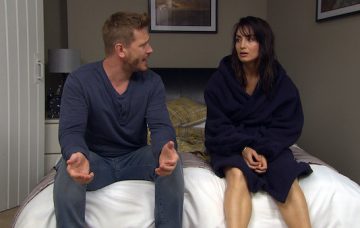 David gets a blast from the past

David Metcalfe is left stunned next week when his old flame – and the reason for his marriage breakdown – Leyla Harding makes a return to the village.

As far as timing goes, it’s not ideal as David has just asked his current girlfriend (yeah, he gets around a bit) Maya Stepney to move in with him.

In fact, when David hears noises from upstairs, he thinks it’s Maya so he gets the shock of his life when he then sees Leyla .

David then finds himself in a tricky situation as he’s forced to explain to Maya who Leyla is and what she’s doing in their home.

Later it all kicks off when Tracy – who left David when she discovered he’d cheated on her with Leyla – comes face to face with her love rival at the B&B.

Tracy is unimpressed to see Leyla back in the village and throws her stuff out in the street.

Earlier this year Amy Walsh teased about the showdown that would happen between Leyla and Tracy when actress Roxy Shahidi returned from maternity leave.

Speaking to OK! Online, she revealed: “Oh yes, there will be fireworks! There’s a lot to answer for!

“Tracy was there for Leyla when Priya did the dirty on her. It’s a very hypocritical thing for Leyla to have done as well as morally – so wrong!

Tracy confronted her quite a few times about her feelings for David. And once again, Tracy was made out to be the bad guy because she was making her leave the village.

“I think she’s got a lot to answer for and a lot to make up for!”

What would you do to Leyla if you were Tracy? Let us know by commenting on our Facebook page @EntertainmentDailyFix!