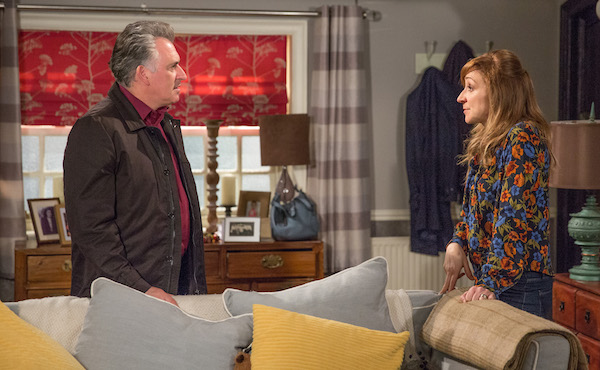 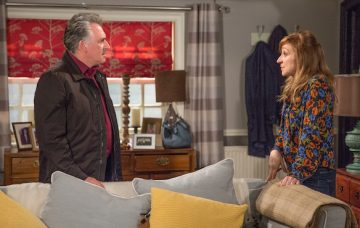 Things aren't so rosy between the pair

It looks like the relationship between Bob Hope and Laurel Thomas could be on the rocks in Emmerdale.

Laurel is growing more and more frustrated at her live-in lover as he still hasn’t got a job. She’s tired of feeling like a nag as she’s forced to push him – again – about getting some kind of gainful employment.

Meanwhile Laurel’s friend Nicola King becomes concerned when she spots how annoyed Laurel is getting with Bob.

Later, Laurel finds herself opening up to vicar Harriet Finch about the state of her relationship with the former door-to-door salesman.

But what does this mean for the couple?

Bob and Laurel got together earlier this year after starting an affair behind the back of Bob’s now-estranged wife Brenda Walker.

One thing led to another and the pair ended up having a steamy romp a year ago, which was revealed when Laurel became a suspect in the murder of Emma Barton.

They tried to stay away from each other to spare Brenda the pain, but it wasn’t happening and soon they were meeting regularly for secret sessions at Mulberry Cottage.

It wasn’t long before Brenda got wind of the affair however and she decided to toy with Laurel.

Meanwhile Bob and Brenda tied the knot, even though Bob knew it was Laurel he really wanted to be with.

After the wedding Brenda discovered his true feelings and told him she wouldn’t be second best.

Bob then moved in with Laurel before handing his share of the cafe over to Brenda, leaving him unemployed.

Since then he’s been unable to find work, leaving Laurel carrying the financial burden while growing more and more irritated by Bob.

Be careful what you wish for, as they say…

Should Laurel kick Bob into touch? Leave us a comment on our Facebook page @EntertainmentDailyFix and let us know what you think!