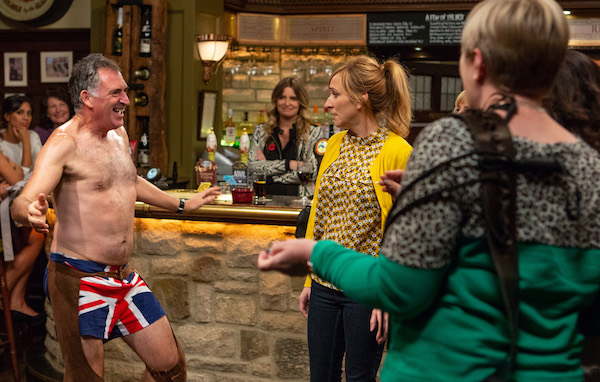 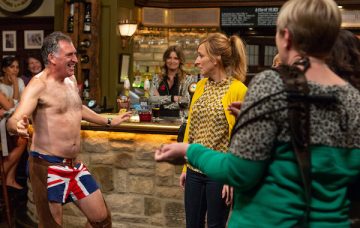 His new career doesn't impress her...

Laurel Thomas has been having doubts about her relationship with Bob Hope for a while now. Things reach breaking point next week when she finds him stripping in the Woolpack.

Bob hasn’t had any work ever since he left Brenda, and the cafe they ran together, for Laurel. With no idea Laurel’s not as set on their future as he is, Bob thinks getting himself a job might smooth things over between them.

Laurel, meanwhile, has decided she has no choice but to tell him the truth about how she feels and end things between them.

Doug’s shocked when he finds out Laurel is planning to break Bob’s heart, and persuades her she needs to give it more time. She agrees to attend the opening of the community garden in Gerry’s memory with Bob, but is utterly confused about her feelings.

Laurel later decides that a few days away might clear her head and leaves to get some space.

Bob, who still doesn’t have a clue why Laurel has left, secures a job in the Woolie. He’s thrilled to be back behind the bar, and back in gainful employment.

He wants to get stuck into making his mark and it’s not long before the wild suggestions for theme nights start flying. The first idea he runs past Chas, Charity and Marlon is to hold a stripper night that week.

He’s pleased as punch when the tickets sell out, but disaster strikes when the strippers cancel.

Left with a pub full of people and no act to entertainment them, Bob decides there’s only one thing for it: he’ll have to strip!

Doug, Jimmy and Rishi are roped in to help him out (what an array of hotties!) and together the guys get their kits off.

Now, it’s not necessarily the night of hunks most villagers had their hearts set on, but Bob seems to be going down a storm when Laurel returns.

She’s stunned to see him gyrating in his Union Jack pants on the stage. Let’s just say if her mind wasn’t already made up about their relationship, it certainly is now!

Bob’s oblivious and playfully tries to get her to join in the fun by pulling her up on stage. Embarrassed and annoyed, Laurel lashes out and pushes him over, telling him they’re finished.

Humiliated and heartbroken, will Bob persuade her to change her mind?

Or is this the end of the couple?

Should Laurel and Bob stay together? Leave us a comment on Facebook page @EntertainmentDailyFix and let us know what you think!