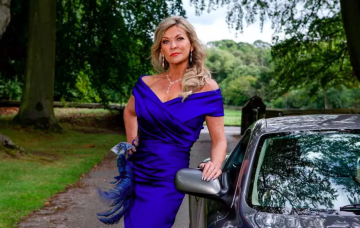 She's back and she's got revenge on her mind

It’s a huge week in Emmerdale next week and it’s mostly down to the arrival of an unexpected guest at Home Farm – Kim Tate.

She is first seen as she’s released from prison and is greeted by Joe Tate’s right hand man, Graham Foster.

Graham is becoming increasingly suspicious of Joe as the week begins and soon realises what he’s plotting.

At the prison he fills Kim in on the latest news from Home Farm but is left sickened when Kim tells him he needs to get rid of Joe. Would Graham go that far?

Later, Graham is grim-faced as he holds a garotte and tells Joe he knows his plans for his wedding and for Home Farm.

But breaking his promise to Kim, Graham hands Joe a bag he’s filled with £100k and tells him he needs to leave – and soon.

What will Joe do?

As the masquerade ball gets underway, the villagers get competitive with each other as they bid on the charity auction.

Pollard in particular is ashen as Faith rails him into bidding on a sports car.

Soon the guests gather outside the house and await the delivery of the winner’s brand new sports car.

The car eventually pulls up and the guests are left stunned when Kim emerges from the vehicle and declares herself as the true owner of Home Farm.

She then invites everyone back inside but it’s not long before she starts offending her guests with her acid tongue.

Later, there is a piercing scream and the guests watch on in horror as Kim comes flying down the stairs, crashing into the champagne fountain at the bottom.

Will Kim live to tell the tale? And will she reveal who pushed her?

Who do you think pushes Kim? Leave us a comment on our Facebook page @EntertainmentDailyFix and let us know what you think!