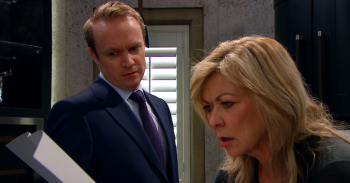 She finally has answers to who Graham has been hiding - but is it Joe?

Kim Tate is going to make a shocking discovery in tonight’s Emmerdale.

She will be left shocked when her private investigator hands her some CCTV footage showing who Graham Foster has been talking to behind her back.

But is it Joe Tate? Or her estranged son James?

The soap has promised it will leave Kim incensed and she will plan her revenge.

Viewers have been left divided over who Graham made his mysterious phone call to on Friday night.

He told the person on the other end of the line how they needed to change the plan after Kim discovered someone had been making withdrawals from her accounts.

“We’ve got a problem,” Graham told a mystery person on the phone, adding: “We’re going to need another plan.”

Fans remember Kim telling Graham to find her missing son while she spent the last six months of her prison sentence inside.

But other fans just want the whole mystery over saying six months is too long to be kept waiting for a cliffhanger to be resolved.

One tweeted: “Someone PLEASE confirm whether Joe is dead or not. I’m tired of this #emmerdale.”

Another exasperated viewer said: “Joe Tate is in a [coffin]. Please #Emmerdale end the endless ‘is he dead?’ crap!! @emmerdale.”

A third added: “Did Graham lie about Cain to hide the fact he is secretly protecting Joe or is he telling the truth? I just need to know #Emmerdale.”

Happily for haters of the storyline, it looks like real answers will finally be revealed tonight with Kim finding out who Graham is hiding.

But is it Joe? Or James? Or has he teamed up with Zoe to take revenge on her for ordering Joe’s death?

Who do you think it is? Leave us a comment on our Facebook page @EntertainmentDailyFix and let us know what you think!