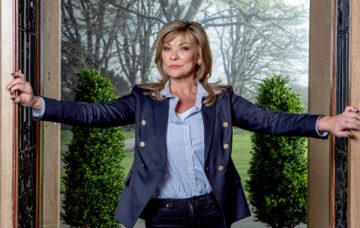 Kim Tate makes her much-anticipated return to Emmerdale next week, and it doesn’t take her long to cause drama in the village.

Emmerdale fans have seen Graham Foster and Megan Macey growing closer over recent weeks, but of course that’s all about to change when Kim comes back and starts calling the shots once again.

As Graham and Megan plan to have a family trip away with Eliza, their hopes for a special break together are shattered when Graham gets a call from Kim.

Graham’s former flame and business partner has been released from prison once again and is demanding that he come and collect her from jail, leaving Megan annoyed.

When the car breaks down on the way home from the prison, Cain Dingle comes to their aid… but his knight in shining armour act doesn’t last long when he realises who is in the car.

Having clashed with Kim last time she was in the village, Cain isn’t happy to see her back in Emmerdale and the battle lines are drawn between the pair.

As news that Kim has returned spreads around the village, there’s no one who is particularly pleased to see her.

Faith is left rattled when Kim tells her that she will get revenge on her after discovering that she was the one who pushed her over the balcony at the Home Farm masquerade ball.

And Cain is in the firing line once again when Kim tells him that unless he plays ball and does as she says, she will start digging for evidence to help the police convict him of Joe’s death.

Kim’s clearly not back in Emmerdale to make any friends… so what has she come back for?

She doesn’t waste any time in getting what she wants and is soon setting her sights on seducing an unsuspecting Graham.

Read more: Emmerdale: James Tate will return to the village

But with his mind set on playing happy families with Megan and Eliza, will Graham be lured in by Kim’s sultry seduction?

Graham is rattled when she turns on the charm, but it also seems that he could also be in danger when Kim starts to look into the business accounts at Home Farm.

What will she unearth?

Will you be glad to see Kim back in Emmerdale? Leave us a comment on our Facebook page @EntertainmentDailyFix and let us know what you think!