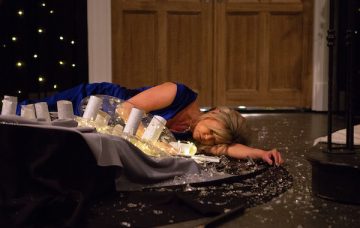 Her return to the village may only be a fleeting one...

It looks like Kim Tate’s return to Emmerdale could be short and, well, not particularly sweet as next week someone has murder in mind as they push her down the stairs at Home Farm.

Kim causes quite the stir when she arrives at the masquerade ball in a swanky sports car that is being auctioned off for charity.

No one can quite believe their eyes when Kim steps out of the luxury motor and declares that she is the true owner of Home Farm.

She then invites the astonished guests back into the ball and tells them to carry on partying.

But it’s not long before Kim is up to her old tricks and her loose lips make sure she’s made a whole host of enemies throughout the evening.

Later, the guests are left horrified when they hear a piercing scream and Kim is pushed down the stairs, where she crashes into the champagne fountain at the bottom.

But does Kim live to tell the tale? And who out of the many enemies she made in such a short space of time could hate her enough to try to kill her?

It was announced last week that Emmerdale’s most famous superbitch would be returning for a short stint.

Actress Claire King spoke about her return on Lorraine.