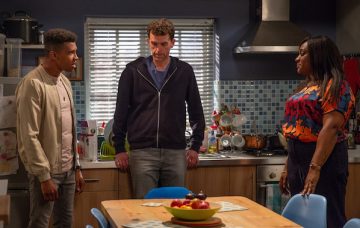 Her family secret is out - but is she hiding something else?

Jessie Grant’s secret has really got people talking about Emmerdale and fans have come up with loads of theories about what Marlon’s love interest could be hiding.

The most popular theory is that she’s in the village for revenge on Belle Dingle for killing Gemma Andrews who fans think could be Jessie’s daughter.

All is revealed next week when Jessie finally confesses all to Marlon.

As the week gets under way, Marlon is puzzled by Ellis’ attitude towards his mum and asks Jessie whether there is something going on that he needs to know about with Ellis.

Meanwhile Ellis realises that Jessie is keeping something from him that Marlon doesn’t know about either.

What is she up to? Could there be someone else in her life meaning heartache for fan favourite Marlon?

Marlon returns and Jessie finally reveals the truth to him, leaving him floored.

But what is she hiding?

Emmerdale fans have been trying to guess what Jessie is hiding following on from a loaded conversation between her and Ellis last week.

Viewers finally came up with what they think is the answer – and it’s bad news for Belle Dingle.

Obviously not thinking the blonde beauty has been through enough with her ordeal at the hands of killer Lachlan White, they now think that someone in the village is after her blood.

Back to the present day and Jessie recently revealed to her newly arrived son Ellis, that she hadn’t told Marlon something and only planned to if she really had to.

Gulp. But what could this something be?

Trying to make a deal with the police, Lachlan cruelly told them he’d only reveal where the blonde heiress is if Belle comes to see him in remand.

Belle tried but found the thought of coming face to face with her killer ex too much and fled the prison.