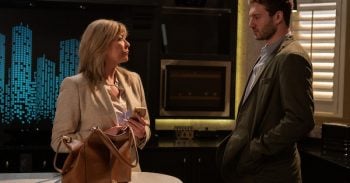 After desperately trying to engineer a way to get her son back in Emmerdale, Kim Tate thinks all her Christmases have come at once next week when Jamie steps foot back in the village.

But with Jamie convinced his mum is still in prison, it looks unlikely their reunion will be a happy one.

Emmerdale fans will know that Kim has got Rhona Goskirk on her side, thinking that she could be a handy way to get her claws into the village veterinary practice.

And with Rhona being at her most vulnerable at the moment, Kim couldn’t have chosen a better time to pounce.

As Rhona tells a delighted Kim that Jamie is coming to the vets for an interview next week, the queen of Home Farm couldn’t be happier.

But while Rhona’s actions might have pleased Kim, Paddy isn’t happy to hear that the person they’re interviewing is Kim’s son.

However as the time for the interview arrives, Paddy and Vanessa are secretly pleased when Jamie fails to turn up… little do they know he has been caught up in a car crash!

Over on the other side of the village, Megan has landed herself in a whole heap of trouble as she crashes her car while sending a text message.

Not only has she managed to drive straight into the back of Jamie’s car as he headed for his interview, but she has also knocked poor Pollard over and he ends up being taken to hospital in an ambulance.

Rhona is relieved when she gets a voicemail from Jamie explaining what has happened and that he is still keen to do his interview, leaving Kim the chance to use the crash to her advantage.

Later Jamie arrives at Home Farm to get his car keys following the smash and is stunned to come face-to-face with his mum.

But how will the pair react at being reunited after all this time?

As Jamie demands his keys, Kim plays the innocent and pretends to help him find them.

But while Jamie knows his mum is up to her old tricks, little does he know she is just trying to find a way to spend more time with her estranged son.

Will Kim get her way and manage to worm her way back into Jamie’s life?

Are you excited to see Jamie back in Emmerdale? Leave us a comment on our Facebook page @EntertainmentDailyFix and let us know what you think!