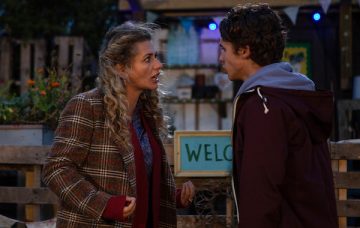 Is the truth about to be revealed?

When Pollard agrees to look after the shop while David and Maya spend some quality time together, Jacob isn’t happy at all and instantly turns into the green-eyed monster.

David has been worried about Jacob’s sullen ways since he shared his forbidden kiss with Maya a few weeks back – oblivious to what has been going on between his girlfriend and the teenager.

But next week sees his worries increase and so he talks to Maya about what could be wrong with his adoptive son.

Maya – who clearly knows exactly what is wrong with Jacob – covers her tracks and says she will talk to the teenager… but she’s left torn when Jacob confesses that he is jealous of her relationship with David.

Later Maya suggests to David that she could spend more time hanging out with Jacob – but is she doing this to keep the peace between David and his son, or does she have an ulterior motive?

Despite her claims that she is doing it so that Jacob doesn’t feel left out, Maya texts Jacob to ask him to spend time together and the schoolboy is thrilled, feeling closer to his teacher than ever.

But while Jacob might have hidden the secret he has had the hots for Maya all this time, he finally confesses to Ellis next week that he has feelings for an older girl and that they’re seeing each other.

Understandably worried, Ellis does the right thing and tells David about Jacob’s revelation, having no idea that the woman in question is not only Jacob’s teacher but also David’s girlfriend!

Maya is fuming when she realises Jacob has been confiding in Ellis and, knowing that it was their kiss he was talking about, Maya lashes out at Jacob.

Confronting him about the fact he has been telling Ellis things that he shouldn’t, Maya coldly tells him to keep quiet and leave her alone. But she might soon regret being so harsh.

Feeling down, a heartbroken Jacob makes a shocking decision that will leave Maya unsettled and wishing that the last few weeks had never happened…

Is David about to find out exactly what has been happening between his girlfriend and his son?