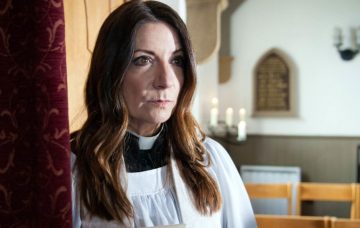 Harriet is desperate to right her wrongs...

Harriet Finch is desperate to help Dawn Taylor when as she continues to spiral out of control over New Year – but will she be able to save the woman she once considered a daughter?

With the truth out that Harriet used to date Dawn’s drug dealing dad while she was working as an under cover police officer, it seems the pair have got a lot of things to talk about.

But while Harriet is desperate to make amends, Dawn isn’t so keen and does a runner.

Harriet desperately tries to track Dawn down, eventually roping Ryan in to help.

Ryan makes a call to Dawn’s phone, pretending to be a client and, thanks to a bit of detective work, it isn’t long before they work out where she is.

The pair track Dawn down to a rough end of town and they head there together to try and persuade her to come back to the village.

But Dawn is back to her old ways, selling herself to raise some cash for drugs, leaving Harriet to realise just how badly her dark past has affected her.

After a close call with Dawn’s pimp, the pair manage to get her to come back to Emmerdale with them… leaving them both relieved that she is safe at last.

But of course, Dawn isn’t going to make this easy for Harriet, and while the vicar tries to get through to Dawn, asking her to say with her in the village, it looks like her apology is falling on deaf ears.

Can Harriet persuade Dawn to stay put with her, or will she be back to her old ways before the new year begins?

And if Dawn does stay in the village, could she find some allies or perhaps even make some friends?

It looks like Dawn is here to stay… but will she ever make amends with Harriet?

Would you like Emmerdale to explore Harriet’s back story more? Leave us a comment on our Facebook page @EntertainmentDailyFix and let us know what you think!