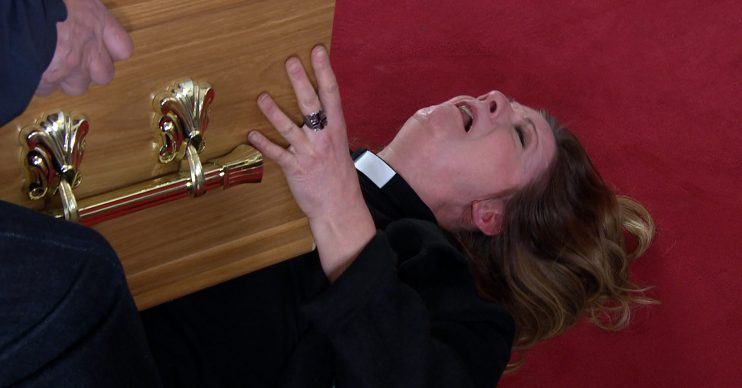 Emmerdale SPOILER: Harriet in danger as Will attacks

There’s drama heading to Emmerdale next week when Harriet Finch finally comes face-to-face with her ex Will Taylor… landing both her and Dawn Taylor in grave danger.

Emmerdale fans have watched as Will has made Harriet’s life a living hell over the last few months, stalking and terrorising her at work and even in her own home.

But last week week viewers saw Harriet make the shocking discovery that Will wasn’t dead after all and the penny finally dropped that it was her ex who has been making her life hell all this time.

Of course soap fans know that Dawn lied that her dad was dead and has been in cahoots with him as his ups his vendetta against the vicar… but Harriet is oblivious to Dawn’s scheming and sat her down to tell her the news that Will was alive after all.

Dawn made a very good show of being shocked at the news her dad wasn’t dead after all, but feels awful that she is pulling the wool over Harriet’s eyes, especially when she has been helping her get her son Lucas back.

But next week sees a new twist in the tale when Dawn is shocked at the lengths that her dad will go to in order to make Harriet pay for sending him to jail when she finds a box of order of services at the house, which are all made up to celebrate Harriet’s life.

Despite knowing that her dad is determined to get revenge, this is a step too far even for Dawn and she confronts him the following day.

But of course the pair get into an argument and there’s a tussle, that ends in Dawn falling and hitting her head on the corner of the table.

Harriet is fuming when she gets home and finds Dawn is injured, and it doesn’t take her long to realise that Will is to blame.

With her ex nowhere to be seen, she locks Dawn in the house to keep her safe and heads to the church to confront Will.

But things quickly take a dark turn when Harriet gets to the church to find it set up for her own funeral.

Harriet then comes face-to-face with Will for the first time since she sent him to jail, and their reunion is far from friendly.

Harriet is left stunned when Will attacks her with the lid of a coffin, crushing her in the process and leaving her in a bad way.

But just how far will he go to get his revenge on his ex?

And will Dawn manage to save Harriet before Will takes his vendetta too far?

Are you glad Ken will be sticking around on the cobbles? Leave us a comment on our Facebook page @EntertainmentDailyFix and let us know what you think!